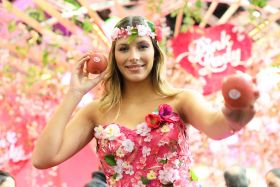 Fresh produce brands Pink Lady and Coregeo have both reported strong sales growth for the first half of 2019.

Pink Lady, which is the best-selling brand in the fresh produce category, reported a 20 per cent sales increase in the month of May compared to the same period last year, a figure which equates to an additional one million kilos sold.

Brand owner Coregeo said year-to-date sales were up eight per cent for the first six months of 2019.

Meanwhile Tenderstem sales have seen a 26 per cent sales increase in the first six months versus the same period a year ago and have also achieved 1.1m kg sold in every month of the year so far.

Coregeo said Pink Lady’s success came on the back of its 'Taste the Wow' campaign, which has seen significant investment in advertising, PR and social media activity, as well as the creation of a new website.

Lynn Shaw, marketing manager for Pink Lady, said: “We’re thrilled to see Pink Lady performing so well with such a significant year-to-date sales increase. The market is very competitive, so this sales growth is hard-won. We’re incredibly proud of the communications campaign we have built for 2019 and it’s satisfying to see it delivering such positive results.”

Tenderstem’s positive restults also came following major marketing investment, the company said, with this year’s campaign running under the tagling ‘Make Every Dish a Little Adventure’ and featuring a tie-up with a number of chefs.