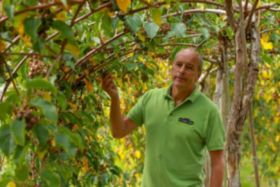 The British kiwi berry season has begun with BerryWorld growers set to produce 70 tonnes of the fruit this year.

Native to Northern China, the kiwi berry has grown in production over recent years, with BerryWorld grower George Leeds, owner of Withers Farm, producing a bite-sized version on home soil in Herefordshire.

Withers Farm was one of the first UK farms to start growing kiwi berries, and it now dedicates 25 acres to kiwi berry production.

Leeds estimates he will produce over 70 tonnes of kiwi berries this season, which will be available in selected M&S stores, Morrisons, Sainsbury’s, Tesco and Waitrose outlets across the UK.

The UK berry is smaller than its Chinese counterpart, is fuzz free and requires no peeling. Inside they resemble a regular kiwi, deep green in colour with a central ray of small black seeds.

The season starts at the end of August and runs until October.

Established in 1958, Withers Farm is a family farm situated near Ledbury. In the past 50 years it has evolved from a small, local farm serving wholesale markets to one of the largest fruit farms in the country, supplying major supermarkets.

In 2018 Withers Farm purchased Monkton Farm, taking the business over 700 acres of production.