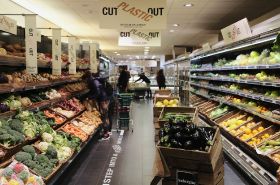 The vast majority of UK shoppers believe retailers still need to “drastically” reduce the amount of plastic packaging on food and drink products, a survey commissioned by retail app Ubamarket has revealed.

The research, whose publication coincides with David Attenborough’s comments to the BBC that the world is beginning to tackle the threat of plastic waste, indicate there is still plenty of work for the fresh produce industry to do in addressing the problem.

Some 82 per cent of UK shoppers said the level of plastic packaging on food and drink products needs to be changed drastically. And despite various efforts from all the major retailers to tackle plastic waste, 77 per cent of respondents said it is food manufactures and supermarkets that are causing the most plastic pollution.

The findings were more encouraging when it comes to shoppers buying habits, with 44 per cent of respondents saying they actively purchase products that have less of an impact on the environment, even if they are more expensive.

However, price is a barrier for many shoppers, with 65 per cent saying they want to make the switch to more environmentally friendly products but feel that these products are often significantly more expensive.

As well as price, a lack of knowledge is slowing change, with 42 per cent said they want to be more environmentally conscious but feel they don’t know enough about recycling or plastic pollution to make informed changes.

Ubamarket CEO and founder Will Broome commented: "Recent events have shown that British consumers are more aware of plastic use and pollution than ever before, and it is great to see that more retailers and manufacturers, have in response, started to make positive steps in the right direction.

“New forms of plastics and packaging, along with the right education, if adopted by retailers, will help cement the UK as a driving force in sustainability and reduce our single-use reliance drastically in the coming years."

The survey polled a nationally representative sample of 2,003 UK adults and was published alongside the launch of Ubamarket’s ‘Plastic Alerts’ app feature, which allows supermarket shoppers to easily identify the most environmentally friendly products.