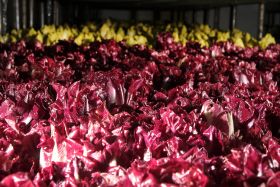 Sales of red chicory have increased by 15 per cent compared to last year at Waitrose, while the retailer reports a 26 per cent increase in online searches for chicory.

Grown in Lincolnshire, Waitrose chicory is grown in complete darkness. Keeping them in the dark is important as light encourages colour pigmentation in the chicon, the root and leaves.

It’s this colour that gives chicory a strong, bitter taste, so the dark environment gives it a creamier, softer and more palatable flavour.

Waitrose says the popularity of chicory has been helped along by a growing dietary trend of choosing foods that promote gut health.

Joanne Lunn, nutrition manager at Waitrose & Partners says, “Chicory inulin is found in the root of this delicious leafy vegetable. It is a type of prebiotic which doesn’t get absorbed by our small intestine but instead reaches the large intestine and the bacteria found naturally in the gut ferment it.”