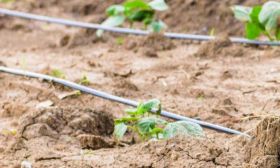 Parts of England could run out of water in the next 20 years, according to the National Audit Office.

The NAO urged Defra to make “rapid progress” and step up its efforts to cut wastage, reduce demand, and develop a clearer sense of direction and coherence among water companies.

It’s research found that England will need an extra four billion litres of water per day by 2050 to counter the growing risk of drought from climate change.

The report singled out the south and south-east of England as the highest-risk areas, where much of the country's fruit, especially apples, pears and berries, are grown.

The NAO, whose role is to hold government spending to account, pointed to research by the Committee on Climate Change warning that demand for water in England will exceed supply by between 1.1 billion and 3.1 billion litres per day by the 2050s, depending on the extent of climate change and population growth.

“If more concerted action is not taken now, parts of the south and south-east of England will run out of water within the next 20 years. Reducing demand is essential to prevent water shortages as water companies are running out of low-cost options for increasing water supply,” the NAO state.

“Defra has left it to water companies to promote the need to reduce household water consumption, and yet it continues to increase. Defra committed to announcing a personal water consumption target by the end of 2018 but has not yet done so, while the introduction of the business retail market has not led to the expected reductions in non-household water usage.”

The report also points to data published from the water companies which show that supply would outstrip demand by 2034-35 if they take no water-saving actions.

Gareth Davies, comptroller and auditor general of the NAO said: “The government has made limited progress on reducing water consumption, tackling leakage and sharing water resources between regions in the last five years, but rapid progress is now vital for the government to deliver its objective of a resilient water supply.

A Defra spokesperson said: “We thank the NAO for this report as an important contribution to our work to meet our future water needs. We recognise that we need to work harder than ever to ensure that we all have enough water in the future and that is why we are already working towards many the report’s recommendations.

“The recently published National Framework for Water Resources sets out a bold vision for bringing together consumers, businesses and industry to safeguard the future of our water resources while ensuring that our natural environment is protected for future generations.”