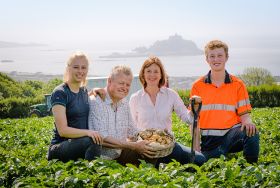 Growers of Cornish New potatoes said their crops are now flourishing after a miserable start to the year.

In conditions that “weren’t ideal” following the wettest February on record, Cornish grower FG Pryor & Son was unable to plant anything between 8th February and 12th March due to waterlogged conditions.

The new potato producer decided to chit its seed potatoes in trays to give the crop a head start as soon as they were able to get back on the land.

From this point onwards the business planted on any dry day that they could. The latter part of March was an extremely busy time for planting however, followed by a warm April with plenty of sunshine and just enough rain to help the plants flourish.

FG Pryor is currently harvesting in the fields around Penzance, lifting the fluffy-skinned Cornish New potatoes: initially destined only for Cornwall, but shortly to be available nationwide.

Much of this will be harvested by hand to protect the delicate skins and make sure they can get the most out of these smaller more geographically challenging areas.

FG Pryor & Son is a significant supplier of Cornish New potatoes, so as harvest gets into full swing during May, everyone on the farm is kept busy. Colwyn Farm has been run by the Pryor family since the late 1800s.

Philip and his wife Denise are longstanding members of Branston’s Producer Group in the South West and they grow around 1,300 acres of potatoes across Cornwall, working with the natural landscape as they have done for generations.

The family say they have been focusing on soil health, moving away from intensive farming and working towards improving and maintaining long term sustainability.

Philip Pryor says: “I want to hand the land over to the next generation in the same or better state than it was handed to me.”

This will be the third season that they’ve incorporated cover crops into their farming rotation. These seed mixes protect the soil over winter, locking in nutrients and then releasing them back into the ground when they’re incorporated in readiness for the next crop.

Pryor says that he’s seen noticeable improvements in the quality of the soil on the farm – giving it a more friable texture and increasing the number of beneficial worms.

The couple’s son Warwick and daughter Amy are actively involved in the farm and they’ve been learning about working with the land from a very early age. As Pryor says: ‘They’re the future and it’s important for them to understand how to look after the farm and the soil that we rely on for the generations to come.”