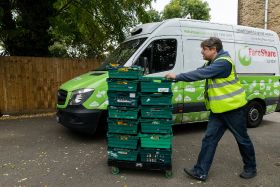 More than £4 million in government funding has been awarded to food redistribution organisations in England, with Wrap naming the first wave of organisations to receive grants designed to help them through the coronavirus pandemic.

The money has been awarded under two governmental grant schemes for surplus food redistribution that are funded by Defra and administered by Wrap.

Firstly, £1.1 million in emergency support has been allocated from the Covid-19 Emergency Surplus Food Grant to 89 not-for-profit organisations in England.

Secondly, £3.2m has been awarded under the Resource Action Fund Food Waste Prevention Grants to small and large-scale redistribution projects, with the goal of diverting, reducing and better managing waste.

Wrap’s director Peter Maddox said: “I am absolutely delighted that we have been entrusted by Defra to deliver this much-needed grant scheme, and that we’ve been able to help so many organisations in such a short space of time. The interest we’ve received every day shows that this is a vital support for many charities.”

The COVID-19 Emergency Surplus Food Grant was launched in early April in response to the immediate challenges faced by food redistributors during the coronavirus outbreak.

Applications for a fund of £3.25m opened in April and the  government contributed an additional £1.6m in May, taking the total to nearly £5m.

The first recipients of the emergency grant include small and medium-sized not-for-profit organisations, as well as some of the UK’s largest redistribution charities.

Wrap said that funding had been allocated under a three-phase structure to ensure as many organisations as possible receive the right support at the right time, and according to their scale of operation.

A total of £669,901 has been allocated to eighty small not-for-profits, with a further £402,451 awarded to nine medium and larger charities.

The majority of small grants (up to £10,000) have been awarded to organisations in the north west (15) and north east of England (13), with 12 recipients based in either the East Midlands or eastern England.

The remaining not-for-profits to receive funding are in Yorkshire and the Humber (two), the West Midlands (seven), London (four) and the South West (eight) and South East (seven).

According to Wrap, the grants were designed to direct urgently needed funding to where it would have the biggest impact in organisations of all sizes, based right across England.

Due to the high number of funding requests from smaller projects, Wrap and Defra have extended the closing date for applications for small grants. It will now accept applications for grants of up to £10,000 until 1pm on Friday 3 July 2020.

The scheme for large organisations is now closed and regular dialogue with the larger grant recipients will inform the next steps for the fund, once the current grants are awarded.

Between them, thirteen small and medium-sized projects have received funding worth nearly £1.2 million.

In addition, funding of nearly £2 million has been awarded to four large projects in London, Manchester and Lincoln. This will pay for capital infrastructure, additional storage space, cold and frozen food storage, air blast freezing for chilled and bakery food and re-labelling equipment.

The Felix Project has received £792,493 to create a new East/South East London depot, to expand its reach.

His Church in Lincolnshire has been allocated £549,095 to increase collection, storage and redistribution of chilled and frozen food; enable air blast freezing; and facilitate the relabelling of ambient food.

The Bread and Butter Thing in Manchester is getting £403,945 to increase storage capacity and expand into frozen food.

And City Harvest in London has been granted £213,836 to finance a larger warehouse and increase cold and ambient food storage. This will help the charity meet the supply of new unlocked sources of surplus food and reach new beneficiaries.