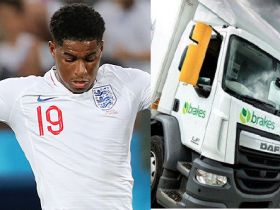 The task force was founded by Rashford, after the Manchester United striker began campaigning on the issue of food poverty, having experienced it first hand as a child.

Comprising of leading retailers and food businesses, the task force has made three policy recommendations to the government to fight hunger among the UK’s youth.

Brakes stated that the foodservice sector was under-represented in the task force and were keen to link up with Marcus to lend support.

In signing up to the Child Food Poverty Task Force, Brakes has committed to endorsing three policy recommendations:

· Expansion of free school meals to every child from a household on Universal Credit or equivalent, reaching an additional 1.5million 7-16 year olds

· Expansion of holiday provision (food and activities) to support all children on free school meals, reaching an additional 1.1million children

· Increasing the value of the Healthy Start vouchers to £4.25 per week (from £3.10) and expanding into all those on Universal Credit or equivalent, reaching an additional 290,000 pregnant women and children under the age of 4

Rashford said: “This is an inclusive Task Force and I’m amazed by the momentum it’s gathering, with Brakes as our newest member. There is such power in us all standing together and I’m very proud that I stand with influential voices and platforms who are committed to changing the lives of millions of children in the UK. I’m confident Brakes will be able to offer new and valuable insight. No one wants to see a child going hungry and the time for change is now.”

Brakes described joining the charity as a “natural progression”: through its Meals & More charity, it has already provided around 500,000 meals for the nation’s most vulnerable children since it started in 2015.

It also supports food provision at more than 150 clubs a year, which give more than 10,000 children the opportunity to take part in activities, enjoy healthy food and avoid the social isolation which often results from poverty.

Hugo Mahoney, Brakes CEO, said: “Child food poverty is a societal problem that Brakes passionately believes we need to address; so much so, that in 2015 we started our own charity, Meals & More, to help fund, educate and provide practical support to address the complex issues of child holiday hunger.

“The Child Food Poverty Task Force has an incredibly important role to play in today’s very difficult climate, with many families struggling to put food on the table.  We applaud the amazing job Marcus has done in shining a light on this important issue, and are ready to play our part in supporting the aims of the task force.”