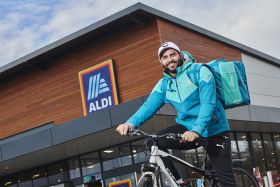 Aldi’s on-demand delivery trial with Deliveroo has been expanded to almost 130 stores across the UK.

The supermarket confirmed in October that it had extended its trial to a total of 42 outlets, entering new cities such as Bristol, Liverpool and Brighton.

The discounter has now rolled out the pilot to nearly 90 extra stores in the past month, making home delivery available to customers near select stores in both Scotland and Wales.

Customers within a 6km radius of the participating stores can choose from around 400 essential grocery items.

Once orders are placed through the Deliveroo app, products are picked and packed by Aldi staff before being delivered by Deliveroo’s network of riders in as little as 20 minutes.

“That’s why we’ve been keen to extend our trial with Deliveroo to stores in more new areas, and plan to launch our trial of click and collect in more than 200 additional stores between now and Christmas.

“In the past month, we have made the Deliveroo service available in new areas such as Cardiff and Aberdeen, and will continue to monitor feedback of the service closely.”

Ajay Lakhwani, vice president of new business at Deliveroo, said: "Deliveroo’s on-demand grocery partnerships have proven vital for so many people during this difficult period, allowing families to get the food and household items they need and want quickly.

“The fast expansion and success of this trial reflects the strong customer desire for groceries on demand, an area in which Deliveroo is providing increasing choice.”

Last week, Aldi was named the cheapest supermarket by consumer group Which? for the fourth month running. A basket of 32 items was found to be, on average, 30 per cent more expensive at the Big Four retailers.