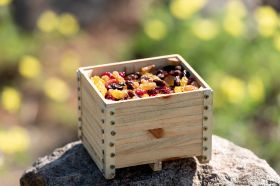 A group of dried fruit heavyweights known as The Dried Fruit Alliance (DFA) is joining forces again to re-educate consumers about the health benefits and versatility of incorporating dried fruit in their diet.

With a combined retail market value of £305 million, the alliance has encouraged its stakeholders to invest in the #eatmoredriedfruit campaign, the group’s second marketing drive.

Its 2019 campaign aimed to debunk myths around dried fruit such as dental health and sugar, targeting trade and consumer press. This reached 10m people with positive messaging about the importance of dried fruit as part of a balanced and healthy diet.

The DFA’s 2021 campaign aims to raise awareness of the health benefits of dried fruit to increase consumption of dried fruit over the next five years.

The campaign will be fronted by TV personality Denise Van Outen, and supported by a raft of lifestyle, parenting, fitness and foodie influencers to help create positive discussion and sentiment around the key health benefits of dried fruit.

It also aims to demonstrate dried fruit’s versatility as an ingredient in sweet and savoury dishes through recipe creation.

Dried fruit sales grew significantly in 2020 due to a resurgence of home baking and scratch cooking, both for cheap entertainment and to feed households stuck at home during lockdown.

Dried fruits sales for the 12 weeks ending 29 November 2020 were 22 per cent higher than last year, during the peak sales period when Christmas baking is popular.

Phil Gowland, DFA executive committee member and commercial director at Whitworths, said: “We’ve joined forces with a selection of dried fruit brands and businesses to actively encourage category growth. In a year when dried fruit sales have risen for the first time in two years, it’s a great time to continue this upturn and talk about the health benefits of dried fruit that many are not aware of.

“The #eatmoredriedfruit campaign is educating consumers that dried fruit has a place in healthy lifestyles being an excellent source of fibre, and a great source of iron and copper which are key in maintaining a healthy immune system.”