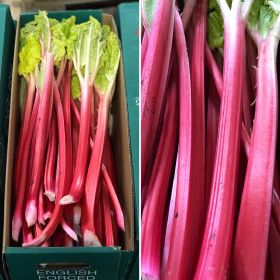 Aldi is stocking 1 million sticks of forced rhubarb to support growers, the retailer has announced.

The retro veg favoured by top chefs would normally go to restaurants but Aldi customers can get their hands on Specially Selected Forced Rhubarb, which takes over two years to grow, from the 4 March.

Forced rhubarb is prized by top chefs and restauranteurs, with a surprising and complex story. Much pinker and sweeter than traditional rhubarb, it is first grown outside for a period of two years so that the exposure to frost toughens the roots.

The rhubarb is then lifted from the ground and placed into forcing sheds. Once in darkened sheds, heat is applied causing the rhubarb to grow quickly in search of light. At the end of forcing, the exhausted rootstock is discarded.

The process is lengthy and capital intensive, requiring special buildings, heating and skilled labour – and now there are only a handful of growers left in the UK. These growers have been badly affected by the closure of the hospitality industry.

Scott Woolford, business development manager, Farm Fresh PO, said: “Like many other suppliers of forced rhubarb, we could experience decreased demand this season as hospitality venues remain closed.  Although we’ve still been able to sell some of our produce locally, working with Aldi has provided us with a welcome increased supply platform to attract new customers and ensure more UK consumers are aware of this great product.

“We are grateful to Aldi for its long-term commitment and ongoing support of Farm Fresh PO. The partnership gives us the confidence to keep investing in our business and we look forward to expanding even further over the next few years with Aldi’s support.”

Julie Ashfield, managing director of Buying at Aldi UK, said: “We are absolutely delighted to be supporting a small scale forced rhubarb farm by helping sell surplus stock, as part of our ongoing commitment to supporting British suppliers.

"We are thrilled to be able to put this year’s harvest to good use, which would otherwise have gone to waste. This unassuming vegetable has long been a staple of the British diet, from fools and crumbles to gins and jams, so we’re looking forward to seeing how Aldi shoppers respond to this delicious retro veg.”

Meanwhie, growers in Yorkshire - the forced rhubarb centre of the world - were "very worried" pre-season as to whether UK wholesale markets would re-open after lockdown 1, according to Janet Oldroyd-Hulme, director of E Oldroyd & Sons, a leading forced rhubarb grower in the famous Yorkshire Rhubarb Triangle.

"As a company, we lost 10 tonnes of forced rhubarb March 2020 as there was no sale for it when we went into the first shutdown, so were indeed very hesitant to go into full production and cut back with the January crop," she told FPJ.

At retail though, demand is sky high. E Oldroyd & Sons Ltd supply Sainsbury's, whose forced rhubarb sales are through the roof, Oldroyd-Hulme revealed.

"Their orders are very high at the moment. I presume demand is so high as people are cooking more at home and experimenting with more unusual recipes than traditional crumbles, pies or simply stewed rhubarb and custard. And of course the customer base currently is demanding local and British produce, so Yorkshire Forced Rhubarb fits the bill," she said.

"E Oldroyd & Sons is currently expanding, so we will be increasing our production in time for 2022 when hopefully the pandemic will be just a memory."