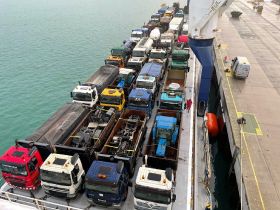 Port of Dover Cargo has announced a regular schedule of calls for Soreidom & Caribbean Line, which will become its first scheduled breakbulk customer.

The shipping company will use Dover for a series of scheduled calls to transport breakbulk cargo between Europe, the Caribbean and Latin America.

Nik Scott–Gray, general manager at Port of Dover Cargo, said: “We are delighted to be welcoming Soreidom & Caribbean Line to Dover for a set of regular calls in the future and are really pleased that they consider the port as best placed to handle their shipments after successful calls here in the past.

“We are now processing every range of cargo in the industry, and with more customers securing the port for a set of future confirmed visits, I have no doubt that our business and its opportunities will grow even further.”

Robert Steptoe, general manager at Soreidom & Caribbean Line, added: “Caribbean Line UK are delighted to announce that with immediate effect, their service into the Caribbean and the north-east coast of South America will now be served by the Port of Dover.

“This move is designed to ensure our customers continue to receive superlative service throughout the shipment cycle. We thank our customers for their ongoing support.”

Since the new Dover cargo terminal became fully operational just over a year ago, its customer base has continued to grow, the port said.