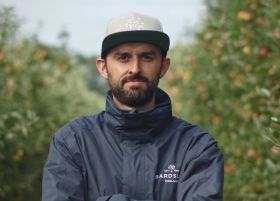 “Labour is a pinch point for farmers, but it could be that is being used in the wrong way.” This is the view of Antony Yousefian, ag-tech director at major UK topfruit supplier Bardsley England, and CEO of the company’s in-house ag-tech business Bx Technology.

“Labour is considered a fixed cost that needs to be reduced,” he says, “but if you’re using a human for intelligence – for data collection, for data management – the potential value is significantly more than what you’re spending.”

Yousefian’s background is in data analysis in the finance sector, and he sees a major opportunity for the improved use of data in agriculture. “The next stage of the agri-tech journey is to see farmers turning from having no IT team, to having half the business employed in IT,” he says.

“If you are designing a new smartphone, all the parameters are known, the inputs and desired outputs are clear, and few products will be out of specification. But in agriculture, most of the inputs aren’t measured, much less controlled. There are so many variables in farming – I find it baffling that agriculture isn’t already digital given how complicated it is.

“Growers are wanting to be data-driven, and they’re collecting data and looking at all these streams of data, and then they’re using their knowledge to try to interpret that. But the complexity is too great for one person.

“Our approach at Bardsley England is different. We have created an in-house ag-tech business called Bx Technology and we are pulling together all these data sources to unlock this ‘business intelligence’. Then, at the same time, we’re building up our own software.

“We see Bx producing lots of tools which could then be rolled out to a wider grower base. We’re focusing on topfruit, making technology that really works for that.”

Bardsley England produces around 90 million apples a year, as well as pears, cherries, plums, apricots and strawberries. It is vertically integrated business, so it grows, stores and packs fruit on site, also handling the fruit of other growers so it can supply the supermarkets throughout the year.

The data collected on farm – data on spraying, pruning, the weather, soil, satellite imagery etc – is being used to create a computer model called a ‘digital twin’. This generates a virtual farm which can be used to make predictions. It can simulate a seven-month growing season in 10 minutes, with 10,000 permutations.

Yousefian explains that once all this information has been processed, the digital twin can be used to answer various questions. For example: there is a temperature difference in that corner of the orchard – is that a driver in the difference in yield across the orchard?

“Being a tech company integrated into a farm has allowed us to move really quickly,” he explains. “A lot of growers don’t know how much a problem is costing them. For example, bruised fruit costs thousands of pounds in wasted time, and a loss of orders and trading relationships, so we have discussed how to identify bruised fruit at harvest and geotag that back to its location and that bin of apples. If there is a complaint, we can trace it back to that location or that tree.”

“Start hiring the talent,” he says, “and utilise data to transition to truly sustainable agriculture.”

Yousefian will speak at an Agri-TechE event called ‘Data Management – More Than A Numbers Game’ on Tuesday 13 April (2pm-5pm).