Veg box scheme aims to rescue 150,000 tonnes of fresh produce by 2025 as part of first annual Do Good Report 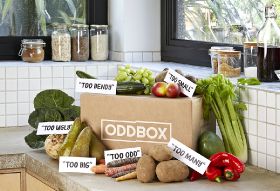 Wonky veg delivery service Oddbox has pledged to save 150,000 tonnes of food from going to waste by 2025 in a bid to help fight the climate crisis.

Oddbox rescuses out-of-spec and surplus fruit and veg directly from growers and delivers it to its customer’ doors. The company marked Stop Food Waste Day on 28 April with the release of its first annual Do Good Report.

The report sets out the actions of the business and the wider Oddbox community to make difference, both now and in the future, including a pledge to save 150,000 tonnes of food waste by 2025.

With over two million boxes delivered since it launched in 2016, Oddbox has already saved 13,790 tonnes of food waste, the equivalent of how much almost 30,000 people would eat in a year.

The company’s supply-led model sees it partner with growers when they need it, rather than tying them into strict contracts on what should be grown, when and what it should look like.

CEO and co-founder Emilie Vanpoperinghe said: "The food industry is dominated by an inefficient demand-led model, with huge pressure on farmers to deliver fresh produce which looks a certain way at a certain time.

“This is not how nature works and leads to a large amount of over-production and waste. We’ve flipped this on its head. Our partner growers come to us when they need our support to distribute delicious produce which supermarkets won’t take. This enables us to be flexible with the variety of fruit and veg we offer to our customers, while fighting waste.”

According to the Drawdown Project, which works to limit greenhouse gas emissions, fighting food waste is the number one solution to reverse the climate crisis and stop the planet from getting 2°C warmer by the year 2100.

Oddbox’s goal of saving 150,000 onnes of produce waste will prevent 16 billion litres of water from going to waste and avoid 164,000 tonnes of CO2 emissions. That equates to the amount of water 270,000 people drink in their lifetimes, and the emissions needed to power half of the UK’s homes for a whole day.

To help achieve this goal, this month, Oddbox has announced its expansion into the Midlands and South West from 28 April, including Birmingham, Coventry, Leicester and Bristol. The expansion area will reach over two million new households.

Heather Lynch, sustainability manager at Oddbox, said: “We’re making business a force for good. So alongside our food waste mission, we’re looking at ways of maximising the difference we make. We will be net zero by 2030 alongside other B Corps, 20 years earlier than the deadline set by the UK Government.

“Last year, we measured our own carbon footprint and from this, we have made a series of sustainability commitments, including reducing the carbon footprint of each box by five per cent in 2021 and planning a fully electric delivery fleet by 2025, all working towards our overall net zero goal.”

The Do Good Report also reveals that Oddbox will continue to partner with London-based food charities The Felix Project and City Harvest. Having donated 300,000 kg of surplus fruit and veg to these charities since 2018, Oddbox has helped provide nearly 700,000 free meals to those in need.