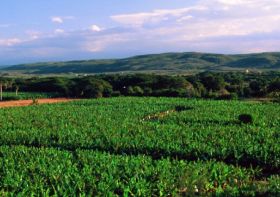 A banana plantation in the Dominican Republic

Thousands of undocumented migrants working on banana plantations in the Dominican Republic can look forward to a brighter future thanks to a new initiative led by Fairtrade.

A coalition of Fairtrade, trade unions, banana producers and civil society groups has devised a ‘roadmap’ to enable migrant workers in Fairtrade-certified organisations to obtain legal status and access the same rights as their Dominican colleagues.

“This is the first time that we are working as a system of producers, workers and markets in a very transparent and responsible way to find a sustainable solution in the best interest of vulnerable populations, whilst also building in some flexibilities,” said Marike de Peña, manager of a Fairtrade-certified banana cooperative and chair of the country’s National Fairtrade Network.

“The migrant situation in the Dominican Republic has been a complicated issue for more than a century, but there are opportunities for improvement.”

Bananas are the Dominican Republic’s leading export, with US$262 million worth of bananas exported in 2018, 60-70 percent of which were Fairtrade.

However, it’s a different story in neighbouring Haiti, the poorest nation in the Americas. Driven by poverty and political unrest, Haitians without identification documents or visas have crossed the border illegally in search of work for many decades.

Despite the Dominican government’s efforts to regularise these undocumented migrant workers, many continue to enter and stay, working in economic sectors with low salaries, unstable employment, and experiencing difficulties in accessing social security and pension schemes.

The existing regularisation process is long and costly, and permits are only valid for a year, making the system unsustainable for the historically high turnover of migrants moving from one sector to another, and back to their home country and families.

“Now most of us have expired documents, which makes it difficult for us to move in the country and claim our rights, and we do not have enough resources to pay for the renewal, which comes at a very high cost.”

The Dominican Republic is home to 39 Fairtrade-certified Hired Labour Organisations (also known as plantations) and 24 Small Producer Organisations. Between them they employ some 16,000 workers.

Many Dominicans have left banana-growing areas and migrated to the cities or abroad – leading to an acute labour shortage in rural areas. In the absence of Dominican or regularised migrants, producers are obliged to hire undocumented migrant workers in order to keep their operations running.

In response, in 2019 Fairtrade and its partners set up a round table on migrant workers, which devised the roadmap.

“The main hope we have is that the round table and all Fairtrade allies manage to influence the costs and frequency of renewal, so that we can stay legally in the country. This is a very positive and important initiative for us, and we hope that the objectives will be achieved,” said Minel.

The roadmap will be rolled out over the next two years. In the short to medium term, it aims to increase workers’ access to social and health services and to protect them against deportation.

At the same time, the round table will work with Dominican and Haitian authorities to raise awareness of the importance of migrant labour to the banana sector and to the economies of the two countries.