Herbs turn over a new leaf

The pandemic has kickstarted fresh herbs, with many products enjoying sales growth of around 30 per cent. Fred Searle reports on the sector's key trends as UK consumers get more adventurous with their cooking 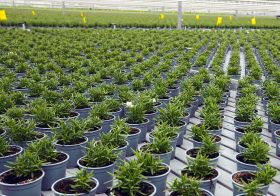 Rosemary sales have been particularly strong of late

A category overlooked by many UK consumers in the past, fresh herbs have really come into their own since the start of the Covid crisis. The sector has enjoyed retail growth of a whopping 23 per cent over the past year, to a category value of more than £105 million.

A range of factors have worked in suppliers’ favour. Consumers have been getting more adventurous with their home cooking, growing more herbs in their gardens, and buying herbs in bigger bunches. And as Mathew Prestwich of R&G Herbs notes, consumer habits have evolved as lockdown measures have changed.

“All varieties of herbs have seen an increase,” he says, “but in the early days of lockdown the traditional ‘British’ herbs were being used as people started cooking the real classics. Then scratch cooking became more popular, and people were being more adventurous, so we saw an increase in the not-so-commonly-bought products such as lemongrass, lime leaves, tarragon and oregano.”

Prestwich says his company has had a “tremendous response” on social media to what he describes as “quirky” recipes and usage suggestions – including tarragon and basil in desserts is one example. “Putting hints and tips on social media as opposed to recipes is a good way to lead people without directing them,” he says. And recipe kits can be great for helping less-assured cooks gain confidence.

One-hit packs of ingredients to provide a ‘meal solution’ are gaining in popularity, according to the R&G owner. “Herb use is about being inspired and it is an aspirational category. People feel good about using herbs and want to be seen to be using herbs, so making them part of everyday cooking, not just that special meal, is important.”

Despite such trends, traditional herbs like coriander and rosemary have sold especially well – and coriander remains Vitacress Herbs’ top-selling herb line, notching up 35 per cent sales growth in the past 12 months. Beyond their inclusion in various recipes, some of the traditional favourites are increasingly being used in new ways, for example as a cocktail garnish. “A sprig of mint or rosemary can really spruce up a drink,” says Vitarcess Herbs MD Simon Conway.

With people spending more time at home, demand for potted herbs has also shot up. Offering customers good value and shelf life, living herbs have also allowed consumers to create their own herb gardens – in back gardens and on patios, balconies and even windowsills – and this is a trend that shoppers have really bought into over the past year, says Conway.

Vitacress recently launched an expansive new range of potted herbs called Season, aimed at experienced and novice gardeners alike. The range includes 48 products including 1l, 2l and 5l pots with classic culinary herbs like basil, coriander, rosemary and chives, as well as ornamental varieties like lavender and dwarf sunflowers. It is available through independent garden centres and the garden trade via UK wholesaler The Plant Yard.

In addition, demand for larger bunches of cut herbs has been higher than normal, especially early on in the pandemic. “In early lockdown, the 100g format was popular, as people were struggling to buy online at the frequency they needed,” says Prestwich. “So having 100g in the fridge felt comfortable and people wouldn’t run out.”

Despite this growth and positivity, it has not all been plain sailing for UK herb suppliers of late. “After a relatively straightforward growing season in Spain, Portugal and Morocco, the transition to the UK herb season has been very difficult,” says Conway. “A very dry, cold April turned into a wet and cold May, resulting in delays of up to three weeks, missed plantings and a loss of crops in the field due to hail and excessive rain.”

This will extend the imported season by at least three to four weeks, the Vitacress MD expects. But after better weather at the start of June, he hopes UK growers will be “back on track” at the end of June.

Climate change and unpredictable growing conditions will continue to be an issue, says Prestwich, admitting that the British weather has “played havoc with quality” of late. “Heavy rain can often cripple crops like coriander and parsley,” he says, “leading to rotting and poor shelf life, so we manage this well with non-UK crops and try to assess suitability for the consumer.”

One way of avoiding the vagaries of the weather is by investing in indoor production, but when it comes to vertical farming Prestwich urges caution. “Vertical farming companies are springing up a lot now, and it is good to see some crops make it to the retailers’ shelves, but we must be cautious that this is done with the consumer in mind.

“Quality, flavour and shelf life are absolutely critical to this category. Herbs is an aspirational category and if the quality and experience isn’t right, then the consumer may turn their back. The vertical farming sector has come on leaps and bounds, and we are working with a number of companies to make sure their proposition is right.”

Demand for fresh curry leaves has rocketed since the start of the pandemic with many consumers attempting curries during lockdown. Simon Conway of Vitacress Herbs reports a large year-on-year sales rise, while Kaushal Khakhar of Kay Bee says Brexit has made imports from India more straightforward.

“One of the big positives of Brexit has been that some of the complex products like curry leaves, can now be more easily shipped to UK. Before Brexit, the UK had to ensure the concerns of all EU countries were taken into consideration.

Khakhar points out that curry leaves are one of the most difficult products to manage in terms of food safety. Any plant protection products that are used on them, e.g. pesticides or fungicides, take several months to disintegrate, requiring more time before the product can be consumed.

As it stands, imported Indian curry leaves are still subject to port health testing for pesticide compliances, but Khakhar hopes these regulations will progressively get relaxed.