Defra has confirmed that a short-term transition of producer organisation funding will be in place, offering certainty to growers 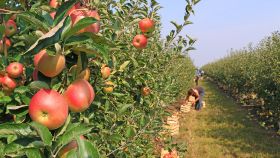 The NFU has welcomed news of a short-term transition of producer organisation funding by Defra.

The government has agreed to a move which farming groups say provides relief for growers and helps avoid a funding gap that could have significantly impacted horticultural businesses.

NFU Horticulture & Potatoes Board chair Ali Capper said: “I’m incredibly pleased that Defra has listened to our concerns and granted a short-term transition to growers that ensures there is no funding gap while a new UK horticulture productivity scheme is developed. Producer organisations are hugely valuable to Britain’s horticulture sector, selling more than 50 per cent of all British fruit and veg, as well as driving co-operation, productivity improvements and technology developments.

“A new UK horticulture productivity scheme is an exciting prospect for growers and we have been working closely with Defra to ensure it is fit for purpose and helps support the sector to grow and be globally competitive. It is critical that producer organisations have sufficient clarity on the structure of the new support mechanisms ahead of programmes ending, so that they have time to make the necessary preparations.”