UK government will not issue any additional visas for agri-food sector, according to BBC 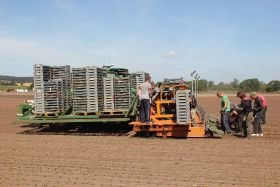 The UK will not introduce any new visa schemes for agriculture and food businesses that are facing acute staff shortages, government sources tell BBC.

The UK government will not take additional action to increase access to foreign labour amid crippling staff shortages across the agriculture, meat processing and hospitality sectors, the broadcaster reports.

Instead of easing immigration rules, government ministers are telling UK firms to improve pay and working conditions in hopes of recruiting staff domestically, it said.

One UK government source told the BBC, "…in order to move to a high-wage, high-skilled economy, businesses should invest in their workforce and improve pay and conditions."

Another government source told the BBC that businesses had been warned in the years since Brexit that they had to move away from cheap labour sources and transition to a high-skill, high-wage economy. Their reticence in accepting this is contributing to the current labour crunch.

Last week, government introduced visas for HGV drivers and the poultry sector, but the pig sector, meat processing and other agriculture-related businesses had hoped for a tailored visa scheme for their industries.