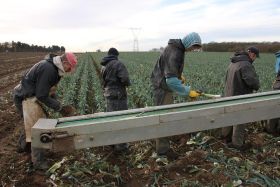 These usually arrive on supermarket shelves in 24 hours, but this year there are not enough seasonal workers to staff the production line and not enough HGV drivers to transport them, resulting in tons of waste.

“Phil Pearson, group development director of APS told the BBC’s You and Yours show last week: “It’s horrendous!  Next year we will have to cut back our glasshouse growing by the equivalent of hundreds of football pitches.”

“We usually describe this period as the golden trading period.,” he continued. “This year we’re going to run out.”

“Local people don’t want to work in the sector and any rise in wages will need to be passed on to the consumer.

“There’s such a huge volume that’s being wasted.  It makes you want to cry.”

An NFU report in July revealed that one in three seasonal worker vacancies were empty this year. The East of Scotland Growers Group of 20 farms were recently forced to throw away 5m cauliflower and broccoli heads. Grower Ian Brown described the situation as “heart-breaking.”

“It’s demoralising to produce the crop to its final stage and then not get it to its destination. It has incurred around £1m of cost to the growers, “ he said, describing how much of the harvested crops have had to be spread back on the land.

“The shortage of workers means that the farms are currently running at about eighty percent of their requirements”.

Before the UK left the EU they allowed 30,000 people to come into the at a cost to the growers of approximately £500 per person.

Angus Berry Group grower, James Porter, explained: “Overall it’s cost me twenty five percent more than last year. It’s not been easy and because of that a lot of growers are rethinking what they are doing. I know of three growers who have decided to stop growing strawberries altogether.”

Pearson continued: “For prices on shelves, with our costs increasing, the cost of food will realistically have to rise by at least ten per cent. Unfortunately, the consumer will have to pay.”