Nearly half of Brits concerned with lack of young people entering the farming industry to pioneer innovation, according to new study 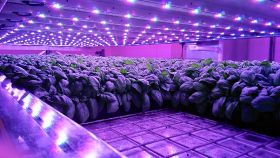 Based in Edinburgh, IGS is a supplier of vertical farming tech

A lack of younger people entering the UK farming industry is resulting in a significant gap in the environmental consciousness needed to address food production concerns to feed a growing population, according to new research.

The survey of over 2,000 UK adults, conducted by vertical farming technology firm IGS, found that 42 per cent of the UK population is concerned about the future of traditional farming, notably that not enough younger people are entering the profession.

With the average age of a farmer in the UK sitting at 58, and with many past the age of retirement, IGS said there are calls for younger farming talent with willingness and know-how to step out of traditional processes and implement fresh ideas to improve farming processes and efficiency.

Signalling a desire for ethical and sustainable food production, 40 per cent of Brits reported caring deeply about where their food has come from, while another 40 per cent are keen to see UK farmers and retailers trying new ways of growing products that have previously been imported.

In fact, nearly a third (30 per cent) believe retailers and farmers should be making greater use of technology to grow sustainable produce all year round.

Asked if they had heard of ‘vertical farming’, only 15 per cent had.

Commenting on the findings, David Farquhar, CEO of IGS, said: “By 2050, the world’s population is expected to grow to 9.7 billion people, and finding ways to sustainably feed that number will be a huge challenge. Coupled with the dual challenges of the ever-decreasing available arable lands, and climate change, the world is no doubt facing a great uphill struggle.

“Younger people with an environmental consciousness, and who are willing to embrace technology, are vital to the future of farming ­– so we need to bridge this gap to ensure that more of these groups are filling these roles.”

IGS will be exhibiting its vertical farming technology at COP26 with a 5.4 metre Growth Tower to showcase what the future of farming could look like. The exhibit will be sited at the Sustainable Glasgow Landing, and is sponsored by Omron and Dexion UK.