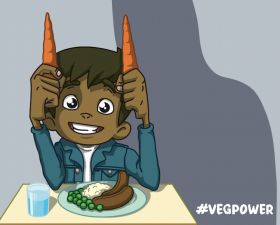 Veg Power, the not-for-profit to increase vegetable consumption, has released a short film to highlight the environmental benefits of eating UK and Irish grown vegetables.

The film, produced with support from Hugh Fearnley-Whittingstall and British and Irish vegetable growers including Riviera Produce, Greenyard Frozen, Monaghans, EVG and Barfoots, showcases how UK and Irish growers have invested and innovated to reduce their environmental impact, as well as the benefits to the planet of eating more veg, and simple steps to help people achieve this.

Dan Parker, Veg Power chief executive, commented, “Over 30 per cent of the UK’s greenhouse gases emissions come from food - yet food isn’t even on the agenda at COP26. Therefore, we felt it was important to showcase the amazing work being undertaken by growers in the UK and Ireland to reduce the environmental impact of their crop.”

Hugh Fearnley-Whittingstall added, “There’s a real danger that the issue of our diet and its effect on the climate will not get a proper airing at COP26, and that would be a massive oversight. And that’s why I agreed to present this short film. Eating more vegetables is without doubt one of the best things we can do both for our health and for that of the planet. Of course we should be getting much more help in achieving that from Government and from the food industry. But let’s not wait for that to happen. Let’s all make a commitment to eat more veg, starting now.”

The film details some of the practices that have been adopted by British and Irish growers to reduce their environmental impact. These include: anaerobic digestion to turn waste into power, methane gas from cows’ slurry being turned into fuel for tractors, improving water utilisation by installing a wastewater facility to clean water used in processing and returning it back into the water system, recycling of agricultural byproducts and the use of solar panels and combined heat and power engines to reduce the environmental impact of greenhouses.

The film can be viewed here.

Veg Power, a not-for-profit Community Interest Company, was founded by the Food Foundation, Hugh-Fearnley-Whittingstall, Sir John Hegarty and Baroness Boycott to turn around vegetable consumption in the UK. It runs a number of creative initiatives to engage, inspire and motivate people to eat more veg and create life-long good food habits. To change children’s perceptions of veg, Veg Power runs the award-winning Eat Them to Defeat Them campaign. Since the campaign debuted in January 2019, it has led to sales of over 517 million additional children’s portions of vegetables worth £63m and achieving over £17m of marketing value for vegetables.