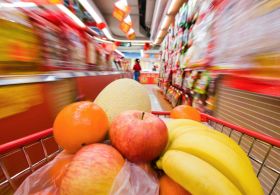 British producers have criticised an IGD retail trial for being unsustainable and lacking insight after it suggested more fruit and veg promotions could be an effective way to encourage healthier diets.

The collaboration between IGD, leading retailers and manufacturers, and researchers at the University of Leeds was designed to test what strategies at point of sale could encourage consumers to make healthier and more sustainable food and drink choices, including those on low incomes.

The first results were taken from promotions across 101 Sainsbury’s stores during a four-week-period in both January 2020 and January 2021.

According to IGD’s Appetite for Change survey, 37 per cent of consumers say cost prevents them from eating a healthy, sustainable diet, so IGD’s latest report tested whether reducing the price of various fruits and vegetables to 60p in stores across the country would increase the number of portions sold and the variety of products purchased.

Sales data analysed by researchers at The University of Leeds, through its Leeds Institute for Data Analytics (LIDA) and Consumer Data Research Centre, found that the number of promoted fruit and vegetable portions sold increased by 78 per cent when the price was reduced.

For higher value and exotic fruits such as avocados, pineapple, mango and kiwi, the promotion generated a greater sales uplift. But not all promoted fruit and vegetables became more appealing to customers, with swede failing to rise above the baseline while on promotion at Sainsbury’s in either January 2020 or January 2021.

As well as boosting the number of promoted fruit or vegetables purchased, fruit and vegetable sales also increased beyond the items on offer. The findings show that promoted fresh produce sales declined after the promotions ended, although the rate of decline reduced year on year, suggesting that some consumers carried their healthier eating habits forward.

IGD’s CEO Susan Barratt said the initial findings show a positive impact through nudge tactics, pricing and product placement, “demonstrating the genuine opportunity our industry has to make healthy and sustainable diets easier and more accessible for everyone”.

However, Jack Ward, chief executive of the British Growers Association, criticised the research for not appearing to explain how the promotions would be funded, and for suggesting that fruits and vegetables are too expensive, particularly at a time of rising production costs.

He added that rather than reducing food prices further, retailers should increase returns to growers to fund sustainable production as the environmental challenges facing them intensify.

“If you slash the price of any product – Porsches, holidays, food – inevitably you will sell more of it,” Ward said. “The report doesn’t appear to explain how this reduction in cost is going to be financed, therefore it’s not particularly insightful and it’s totally unsustainable. Growers are already operating on wafer-thin margins, and many have already indicated they are going to give up as a result of the impact of the past year.

“The debate should not be about price; Savoy cabbage grown in Lincolnshire and sold in Peterborough is less than the price of a Mars bar."

Distracting from the real debate?

The real debate, he argued, should be about encouraging people to make more informed choices about lifestyle and the things that affect their health.

“The cost to the taxpayer of dealing with diabetes is astronomic and the real debate needs to be about how we persuade people to eat more healthily and probably accept that they’ll have to invest more in what they eat and perhaps less in some of the other luxuries of life.

“Particularly this year, when production costs have gone up about 20 per cent, the suggestion that vegetables are too expensive just fails to take account of reality.”

Who pays for promotions?

Carrots are a low-price and heavily promoted category with prices falling significantly in recent years. Major carrot, parsnip and swede grower Guy Poskitt made it clear that his business, MH Poskitt, never pays for retail promotions, with supermarkets absorbing the cost of the price reductions as a way of attracting more consumers to their stores. However, Ward said promotions are generally factored into producers’ retail contracts.

“Vegetables and fruit are notoriously low-margin options for any retailer, and they can’t afford to sell them at extra low prices for very long without seriously prejudicing the profitability of those lines,” he explained. “Inevitably the grower will pick up the cost of promotion somewhere along the line.”

Aside from this, Poskitt said excessive promotions can be damaging for producers because they devalue products, put strain on producers experiencing labour shortages to deliver extra volumes, and encourage more food waste because people buy more than they need if the price is low.

“Promotions can give consumers the perception that fruit and veg is a cheap product, and that when it’s at full price they are getting ripped off,” the producer said. “Actually, in other parts of Europe carrots cost €1.30 or €1.40 per kilo, whereas at British supermarkets they are only 40p or 50p.”

The study's next steps

As part of IGD's research, further findings from Sainsbury’s – looking at whether consumers continued to eat a greater variety of fruit and vegetables in the year after the trial – will be reported on in 2022.

To analyse the results, researchers at the University of Leeds will continue to capture and measure sales data from each intervention and assess what levers truly drive long-term behaviour change.