Complex, diverse and dynamic: the Indian market is becoming ever-more attractive for the fresh fruit and vegetable business 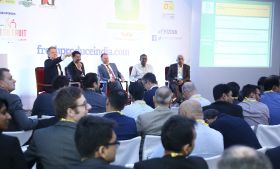 While the complexities of the Indian market increase by the day, the opportunity for fresh produce suppliers in this part of the world has never been greater. This came across very clearly to delegates at Fresh Produce India in Mumbai last week.

Held at the Trident Nariman Point Hotel on 26-27 April, India’s only fresh produce convention event attracted some 250 delegates from more than 20 countries.

During the plenary session on Day One, keynote speaker Devangshu Dutta of consulting firm Third Eyesight made reference to an age-old expression highlighting the diversity that characterises India. “Whatever you can rightly say about India, the opposite is also true.”

Dutta compared India to the EU in terms of diversity, population and languages. Referring repeatedly to the “patchwork of markets” that make up the Indian nation, he urged delegates not to take a one-size-fits-all approach when developing supply programmes. "Just because something happened in the past, it doesn’t mean it will happen in India, and if it does, it won’t likely be at the same speed,” he said.

Despite the market’s intricacies, India’s trade potential is undoubtedly appetising. With a population whose average age is in the mid-20s, Dutta said India is home to one of the world’s youngest and most dynamic consumer bases.

Dutta also pointed out the country’s growing middle class – which is now getting closer to the much touted 200m people – shows a willingness to pay premiums for branded products, with many mid-rung brands from Europe and the US classed as premium in India.

Instead of trying to capture this opportunity with best practice models from other parts of the world, Dutta said the Indian market was a canvas on which a new-look supply chain could be created. “When it comes to business, we put on a hat that’s no longer about the product itself but what’s good for business,” he explained. “In India, we have an opportunity to develop models that deliver products that are really fresh and tasty, but still economically viable.”

There’s little doubt imports will play a more prominent role in India’s fresh produce future. Joining Dutta on stage for an ensuing panel discussion, Filip Fontaine of leading Belgian co-operative BelOrta said India had become far more than a replacement market for Belgium following a European trade embargo with Russia. “India has been ready to give us a go,” Fontaine explained. “Our business has been growing here the last three or four years and it will continue to be an important market moving forward.”

Fellow panellist K Radhakrishan of Tata Starquik.com revealed that new varieties and products created new needs among Indian consumers. The country’s emerging modern retail sector is seen as a logical avenue to introduce new products to the masses. However, Radhakrishan said the reality doesn’t always match the expectation. “Retailers are currently eons behind the mindset of this country,” Radhakrishan told delegates.

E-commerce perhaps holds the key to bridging the divide that Radhakrishan spoke of. Dutta suggested companies with existing retail stores have the best opportunity to capitalise in this space. “I don’t believe operating an e-commerce business by setting up one big warehouse to service a whole city will work in India,” Dutta said. “Omni-channel is the only way it will prosper.”

Modern retail was again in the spotlight during the afternoon workshop sessions on Day One. During the session ‘Purposeful packaging: from preservation to marketing’, Dr Gary Ward of Israel-based Stepac told delegates how his company is working to generate push and pull factors among Indian retailers and packhouses to encourage the adoption of modified atmosphere packaging. Srinibas Swain of Spar India followed Ward’s presentation with a discussion on how Indian consumers were beginning to comprehend the value that can be added thorough packaging. “All the product information is there on the pack, which helps consumers to understand the quality and freshness,” Swain said.

India’s apple importers are prospecting for new supply sources to meet ever-growing demand, with the suspension of access for Chinese apples last June only intensifying the search. Another workshop on Day One turned the spotlight on two emerging sources – Turkey and Brazil.

Pierre Pérès of the Brazilian Apple Growers Association (ABPM) spoke enthusiastically about the opportunities for the country’s high colour Gala and Fuji apples in India, noting that India’s demand for medium and smaller sizes made it an ideal fit for Brazil. Aysel Oguz of Anadolu Etap highlighted the gains made by Turkish apple exporters to India the past year, where shipments have doubled to 5,600 tonnes in 2017/18. But she also pinpointed an unprofessional approach as one of the key factors holding Turkey back. Gagan Khosla of Indian importer NGK Trading agreed, singling out consistency as the most important attribute for any new exporting country seeking to establish themselves in the Indian market.

In the session ‘Building the berry category’, Tracey Burns of Freshmax New Zealand explained how a programme of in-store tastings – coordinated by its import partner Suri Agro Fresh – along with some strategic positioning, was helping to grow awareness for the Munch’n kiwiberry brand in India. “There’s a lot of people out there who want to try something different,” Burns explained. “By putting our fruit in the berry category, we hope to create that emotional connection with consumers, encouraging them to treat themselves to luxury.”

Fresh solutions to India’s cold chain challenge were the focus of another workshop, with Augustine Chalissery of SourceProcureDeliver and Ruchika Kuthari of Maersk India highlighting the need for an end-to-end approach, where distributors and marketers invested downstream and integrated with farmers.

The opening plenary session to Day Two ‘Linking the chain: the future of Indian horticulture’ addressed this very issue. In the session – chaired by former Reliance and McDonald’s supply chain expert SD Saravana Gughan – Subhash Deswal of India’s largest carrot producer Sunshine Vegetables explained the keys to the company’s successful commercial farming operation while Sreeram Chellappa of agri-tech start up FarmLink discussed how it was tackling the challenge of aggregating production from India’s many smallholder farmers to forge ‘chain partnerships’ and consistent supply. They were joined in the panel discussion by Gopal Bihani, head of farm fresh at India’s largest food retailer Future Group, who highlighted the transfer of knowledge to farmers to increase productivity as one of the biggest challenges.

The lack of a robust farm-to-fork ecosystem is also one of the factors deterring private equity and venture capital investment in India’s fresh produce business, as a session on investment models for Indian horticulture highlighted on Day Two. Nevertheless, the two expert speakers – Asish Puri of Avalon Consulting and Kushal Agrawal of Aspada Investments – said horticulture was becoming increasingly attractive to investors, fuelled by a number of factors driving consumer demand.

In the session ‘Creating a sustainable future for Indian grapes’ Geoff Green, head of Capespan Global Procurement, presented a detailed summary of key trends in the international table grape market before turning his attention to areas in which India’s own grape export business might look to improve if it wants to capitalise on its current position as a key supplier to markets in Europe. Top of that list – finding a way to circulate and share information would help exporters make better decisions about the volume of fruit to ship to Europe, Green suggested, adding that the possibility of establishing some kind of export association ought to be pursued further. “The lack of information is a challenge for India,” he commented “There is no organisation that pulls the industry together.”

Fresh Produce India concluded with a programme of tours, with a Market Track visiting Mumbai’s vast Vashi wholesale market and a high-end Big Bazaar outlet, and a Retail Track taking in Crawford Market and examples of street vending of fresh produce in some of Mumai’s upmarket neighbourhoods.

To download the speaker presentations from Fresh Produce India, go to: www.freshproduceindia.com/programme