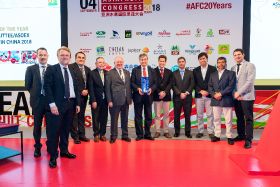 The Chilean Fruit Exporters Association (ASOEX) and its Chilean Cherry Committee won the 2018 Marketing Campaign of the Year for their high-profile campaign to promote Chilean cherries in China during 2017/18.

The US$5m campaign targeted 63 cities across China, seeking to encourage consumption of cherries at any time and for any occasion, with family, friends or alone, while highlighting the fruit’s health attributes. Targeting a range of channels, the campaign succeeded in achieving significant profile at retail and consumer levels, and contributed to a record result for Chilean cherry exports to China in 2017/18, which more than doubled to account for over 85 per cent (160,146 tonnes) of total exports.

Introducing the winner, Asiafruit editor John Hey recognised the collaborative effort behind the campaign, with the industry succeeding in securing the financial backing of virtually all Chilean grower-packer-marketers. The campaign followed on from a similar-budget promotion in 2016/17, but it was expanded and extended to include more cities in 2017/18.

Commenting on the award, Ronald Bown, chairman of the board of ASOEX, said: “We are honoured to receive this prestigious award, which recognises the efforts and commitment of growers and exporters in Chile in facilitating the demand for our cherry exports to China and contributing through this campaign to strengthening our country’s image in Asia.

“We would also like to thank the Chilean Ministry of Foreign Affairs, the Ministry of Agriculture and ProChile, as well as our growers and exporters, members of the Cherry Committee, our marketing team at ASOEX and advertising agencies in China, for their important support and contribution in making this project a success.”

Importer of the Year: IG International

India’s IG International scooped the Asia Fruit Award for Importer of the Year. Since establishing its import business in 1999, IG has become one of India’s premier fresh fruit importers, handling 50-plus varieties of fruit from more than 20 countries.

IG has invested heavily in cold chain infrastructure to support the growth of fresh fruit imports, establishing a national network of facilities and trucks. Such infrastructure has helped the company to deliver fruit with optimum quality and taste to Indian consumers while also giving global suppliers more confidence to ship large volumes to India, Hey noted.

IG was also recognised for its pioneering role in expanding the range of imported fruits available to Indian consumers. Apples dominate India’s fruit import market, and IG has worked with leading global suppliers to introduce a number of premium brands. The company has also helped to grow the market for a range of other fruit categories such as pears, kiwifruit, citrus and, more recently, berries and avocados. IG has taken a proactive approach to promoting imported fruits to Indian consumers, conducting extensive tastings, deploying high-profile brand ambassadors and introducing new packaging.

Accepting the Importer of the Year Award, IG International director Tarun Arora said he was “extremely honoured and humbled”.

“We are earnestly grateful for this recognition we have received today,” said Arora. “It is testimony to the tireless efforts my organisation has, over several decades, put into matching up to the highest standards expected from a premier fruit importing company.”

Meanwhile, the Produce Retailer of the Year Award went to Indonesia’s Ranch Market.

Formed in 1998, Ranch Market has become Indonesia’s leading supermarket targeting consumers with high-quality imported as well as domestically-grown produce. The group operates more than 35 stores under two main banners – 15 branded as Ranch Market, which caters to top-end consumers, and 20 branded as Farmers Market, which have a slightly larger store area and feature more locally-grown products.

Ranch Market group was recognised for its clear-sighted customer focus and its impressive work in promoting fresh produce in the Indonesian market. “The group has raised the bar to a level that has forced others to follow suit, and Indonesia’s predominantly young, growing and aspirational middle class has responded positively to this offer,” said Hey.

Ranch Market’s CEO Meshvara Kanjaya accepted the Produce Retailer of the Year Award. “This award has very deep meaning to us,” she said. “It’s not only a recognition from such reputable organisations of our dedication to fresh, it’s also a motivation and a reminder to our team to keep doing their very best in fresh.”

“Our dedication and achievement in fresh produce is not solely the work of Ranch Market’s team – it’s a collaboration with suppliers, importers, growers, marketing and trade officers and also all our customers. I’d like to take this opportunity to thank them all.”

The Impact Award was launched at this 20th anniversary edition of Asiafruit Congress to honour a person, company or institution that has made a significant impact in developing Asia’s fresh fruit business.

Thomas was recognised for his pioneering contribution to developing Washington/US fresh fruit exports to Asia from the very early years of trade. As well as sharing his market insights with industry, Thomas displayed a career-long commitment to industry export programmes, seeing the value of increasing promotional activities for the benefit of the entire industry, Hey noted.

“After 54 years in the fruit business, it’s nice to be recognised as a leader in expanding the Asian market,” said Thomas.

“Oneonta won the first bid from the Central Trust of China (government institution) to supply Taiwan with apples back in 1972 – they purchased about 100,000 cartons on bid bases for six years. These were the first Washington apples shipped to Taiwan, and it was the beginning of the Asian pipeline as we know it today.

“I was also one of the first to sell to Indonesia and helped to open the door to Washington suppliers in many of these markets,” he continued.

“Without question, the most rewarding part of doing business in Asia was the friendships I made – my experiences in Asia were excellent.”

The four winners of the Asia Fruit Awards were presented with their trophies and certificates by Wilfried Wollbold, commercial director of Asia Fruit Logitica organiser Global Produce Events, and Chris White, managing director of Fruitnet Media International, which publishes Asiafruit Magazine and organises the Asiafruit Congress.

The Asia Fruit Awards were presented before the Networking Lunch at Asiafruit Congress, Asia’s premier fresh produce conference event held in Hong Kong. The conference is the precursor to the Asia Fruit Logistica trade show, which takes place on 5-7 September at AsiaWorld-Expo Center in Hong Kong.