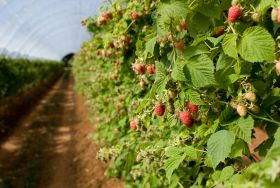 Australia has launched plans to secure the future of its rapidly growing raspberry and blackberry industry, with the commencement of the Industry Biosecurity Plan for the Rubus Industry at Berry Quest in Mooroolbark, Victoria.

Developed by Plant Health Australia (PHA), the coordinatior of plant biosecurity in Australia, Raspberries and Blackberries Australia (RABA) and government experts, the plan was launched the week beginning 7th October.

Brad Siebert, PHA’s manager of biosecurity preparedness and implementation, affirmed the importance of the plan for the Rubus industry given its aim to identify potential threats and take action to keep pests out of Australia.

The plan has identified over 200 exotic pests that post a threat to the Rubus Industry, including 13 that were deemed high priority.

“If any of them were to arrive into Australia they have the potential to cause significant impacts to berry production,” Siebert said in a RABA press release.

However, he did identify the industry’s primary source of concern.

“A species of exotic fruit fly, the Spotted-winged drosophila (Drosophila suzukii) is by far the biggest concern for the industry,” Siebert said. “Unlike other fruit flies, this pest can infest not just ripe fruit, but also fruit as it is ripening. The females lay eggs beneath the skin, larvae hatch and feed on the fruit leading to rapid softening and wrinkling, rendering the fruit unmarketable.”

RABA President Philip Rowe added that the plan also identified a number of actions to reduce the risk of these pests entering and establishing in Australian farms.

“One thing we need to do is to raise awareness of exotic pest threats among Rubus growers,” he said in the media release. “That way, if one of these pests does make it into the country, we can spot it quickly, giving us the best chance to contain it and hopefully eradicate it. RABA is proud to have taken this initiative to protect our farmers into the future.”