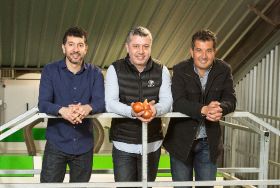 Since the first acquisition, Mitolo has also acquired Oakville’s Hillston Farm in NSW, adding a supply of brushed potatoes during the December to January, and July to October windows.

“We saw the South Australian farm assets as important, and not easily replaced – our key focus was to get those farms and the water assets that come with them,” Mitolo said. “We see huge opportunities in consolidating the washing and packing operations and bringing the packaging equipment to South Australia.:

The acquisitions make Mitolo the largest washed potato grower-packer in the country, and gives the group a full 12-month supply of brushed potatoes.

“Brushed is new to us, but we’ve also bought the rights to varieties developed by Plant & Food, including Crop 13 and Crop 17 – these varieties are the benchmark for brushed,” Mitolo said. “Through our combination of network and varieties, we’re hoping to add our expertise to the brushed operation.

“We now have one of the strongest varietal portfolios in Australia, which gives our customers innovative and cost efficient variety pipeline into the future.”

The Oakville acquisitions further add to the potato and onion grower-packer-shipper, which earlier this year invested A$5m in a Unisort onion sorting line to improve its packouts. The technology uses Near-Infra Red (NIR) technology to detect internal defects before the onions are packed and distributed.

Mitolo said over the past five years there’s been increasing issues of internal rots in onions grown in some areas. Coupled with increasing quality control and higher demands of retailers, Mitolo said not having the sorting line was a risk the group just couldn’t afford.

“We’re now at the point where we have the confidence we can supply a produce with as close to zero internal defects as you can get,” Mitolo explained.

“[The investment] was a strategic decision on our part to lift the bar on the Australian onion industry.”

The full interview with Frank Mitolo appears in the summer edition of Produce Plus, out mid-November