Australian retailer Woolworths has launched its Christmas-themed carrots for reindeers 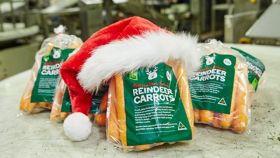 Leading Australia retailer Woolworths has launched its Christmas line, Reindeer Carrots, to capitalise on the additional 140 tonnes of medium-sized carrots expected to be sold ahead of 24 December.

Woolworths said its research revealed more than half of Australian households with children will leave a carrot out for Santa’s reindeers on Christmas Eve.

“We know that over two-thirds of Australians have enjoyed the tradition of leaving a carrot out on Christmas Eve at some point in their lives and over half of kids will leave them out for Rudolf and friends this year,” said Scott Davidson, Woolworths head of produce. “That’s why we’ve introduced fresh, Australian-grown Reindeer Carrots.”

The carrots are sold exclusively at Woolworths, packaged in 1kg bags and selling for A$1.90 each, with Queensland carrot grower Steven Moffat of Moffat Carrots growing some of the new crop of reindeer carrots .