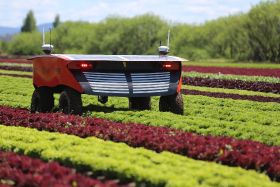 University of Sydney researchers are exploring new technology to automate the application of liquids, such as fertiliser, at precision and high speed.

The Robot for Intelligent Perception and Precision Application (Rippa) is being trialled on leafy vegetable farms in Australia, with the aim of reducing application input costs and improving information for better decision making.

The solar-powered robot uses sensors to map out crops and collect data on weeds and foreign objects, which is then sent to researchers, in real time.

Project lead, Salah Sukkarieh, told Produce Plus that trials are taking place on a number of farms in Queensland, New South Wales and Victoria.

“It’s all about crop intelligence,” he explained. “Getting the right sensors on the platform with the right algorithms means we can identify individual plants. The longer the platform is out in the field, the more data is collected, and hence the better our understanding and development of algorithms and software that can tell whether an individual plant is underperforming or is not healthy. Once we know this, the appropriate decisions can be made on how to act – spray a particular fungicide on a plant, for example, or target spraying of fertiliser.”

While the technology has been proven, Sukkarieh said the timing of its commercial release will depend on the business model.

“At the moment the technology is very well proven with the remaining steps being complete operationalisation of the system on a farm.

“However, to get to the point of it being commercially available will depend on the type of business model that makes sense,” he said. “Would it be owned by the farmer or leased, would it be shared by farmers or will a consultant use it as part of their service? These are all currently being explored.”

Rippa is being trialled by the University of Sydney’s Australia Centre for Robotics, funded by Horticulture Innovation Australia’s vegetable industry levies and funds from the Australian government.

A full rundown of technology updates features in the upcoming Autumn edition of Produce Plus. Subscribe to order your copy.