New season underway, with volumes and promotions set to ramp up over the coming weeks 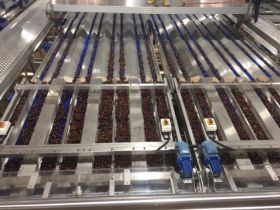 Northwest cherry import programmes are underway in Australia, after the season’s first shipment was cleared earlier this week.

The initial consignment was followed by further small shipments over the course of the week, with volumes expected to ramp-up from next week onwards.

A number of Northwest Cherry Growers’ international sales representatives are currently in Washington State, gaining a first-hand look at this season’s crop, along with the significant investments made by many packhouses in state-of-the-art grading technology.

The representatives have toured around early season production areas in Yakima and travelled up to the later season areas in Wenatchee and on towards the Canadian border.

Indications are the crop will be close to a record, with the weather still quite cool for this time of year, meaning supply programmes are likely to extend well into August.

With the timing of the crop, the main bulk of Australian promotions are planned to run for one month from around 10 July.