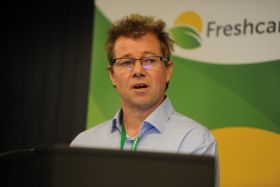 Harmonisation was the buzzword at the 2017 Freshcare Forum in Sydney on 8 August.

Belinda Millard, GlobalGAP key account manager for Oceania, drew on her experience as a project member of HARPS (Harmonised Australian Retailer Produce Scheme) to co-present with Freshcare’s general manager, Clare Hamilton-Bate and Citrus Australia’s David Daniels, in an engaging and interactive session that took lessons from the Australian domestic market and extended it into a thought-provoking look at the international standards.

Five years ago, grower-owned body Hort Innovation began a project to harmonise food safety certification requirements for the major retailers in Australia, Millard explained. The adoption of HARPS meant that individual suppliers no longer had to comply with a plethora of food safety systems when dealing with multiple retail customers.

With HARPS, Australia’s five major food retailers are finally heading in the same direction, at least regarding food safety. But where does that leave suppliers wanting to take advantage of export opportunities in Asia and elsewhere?

“We are sitting on a precipice,” Hamilton-Bate told the forum. “The number of different regulations and compliance schemes in overseas markets means there is scope for great confusion.”

She went on to list examples of different pathways to and drivers for food safety compliance, among them ASEAN GAP and associated local market systems; GFSI’s global markets program; and the US Food Safety Modernisation Act.

“As things stand,” Hamilton-Bate told the forum, “there is no single entity that can fit across all jurisdictions. We have come a long way in harmonising standards within Australia, imagine if we could facilitate that process across international markets.”

No sector is more alert to the vagaries of foreign markets than Australia’s booming citrus industry. David Daniels, the market access manager for Citrus Australia, gave the forum audience a snapshot of a dynamic industry: 1,500 growers cultivating 25,000ha for an annual production of around 750,000 tonnes, of which a third is exported.

With exports a large and growing market, Australian citrus growers know they have to stay on top of international food safety standards. Australian citrus is exported to more than 50 countries and attracts a high premium, with our oranges renowned for their excellent colour  and sweetness; their clean, green image and their reputation for safety.

The latter is particularly useful in China, where Daniels said consumers “have no confidence in their own food supply" due to incidents such as the contamination of infant formula with melamine, not to mention hair-raising tales of exploding water melons (caused by the use of growth accelerator) and the sale of 40-year-old frozen meat.

But while the US, Canada, New Zealand and Australia all recognise each other’s food safety requirements, the same is not true of some Asian countries – including important markets such as China and Indonesia. Regulatory hurdles to get over include quarantine; food safety, such as managing MRLs and other hazards; non-technical barriers like quotas, tariffs and embargoes; and technical specifications like packaging and labelling requirements.

The citrus industry, Daniels told the forum, worked hard to keep up with the constantly shifting landscape of international food certification. And while the industry looked forward to a future in which international standards were harmonised, that future was some way off.

A rigorous, government-backed pesticide residue monitoring program is just one of the initiatives used to ensure the integrity of Australian citrus, with Citrus Australia working in partnership with the Australian government to regularly test spiked samples at accredited laboratories to ensure they are competent in detecting what they are supposed to.