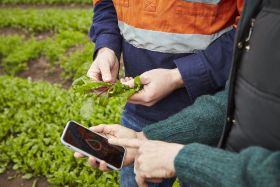 Ag-tech start-up The Yield has launched a free app for growers, offering public weather data tailored to a farm-based perspective.

The app is the first step towards the launch of its Sensing+ for Agriculture solution in October, which will offer end-to-end microclimate sensing, data analysis and on-farm predictions.

For now, growers can download the free app that analyses Bureau of Meteorology (BOM) data to provide information on wind speed, wind direction, rainfall, and temperature.

James Bresnehan, owner of the Back Paddock Vineyard in Tasmania, began using the app following a dry period in Tasmania’s Coal River during the 2016/17 grape growing season.

“We had come into the previous growing season with restrictions in place to the tune of 20 per cent less available water, after which we realised – if we were to have a successful 2016/17 season – we needed to be a lot smarter and more aware with irrigation,” he explained. “I had heard about the new app that had just been released by The Yield, and after reading up about it I could see how it might complement our irrigation system.”

Bresnehan said the app came in handy when scheduling irrigation, and allows them to be more water efficient from late August, if it’s been a dry winter, until harvest, which can run until late April.

“To be able to open the app, and quickly see today’s water deficit in our district is incredibly handy, and is the first port of call when I open the app. I then swipe down and look at when any rain is forecast, and see how the next seven days are shaping up. This has proven to be invaluable in helping keep our irrigation schedule on point, by taking the forecast conditions into account.”

The app also shows evapotranspiration – the water transferred by evaporation from soil and plants to the atmosphere – offering a look at the water balance of a certain area. The Yield analyses 2.5m data points every six hours to calculate evapotranspiration for stations around Australia, and displays it as a simple water drop in the app.

“It’s all well and good to see forecast rainfall using standard weather apps, but to understand how much water deficit is actually occurring is quite game changing, especially when water resources are tight during dry periods,” Bresnehan said.

The Yield’s Sensing+ solution will build on the capability of the free app, but will use on-farm sensor data combined with artificial intelligence to offer real time information on what is happening in specific paddocks, giving growers the information they need to know to make decisions about irrigation, harvesting and planting. Sensing+ will measure temperature, rainfall and wind conditions as well as relative humidity, leaf and berry wetness, total solar and photosynthetic active radiation and soil moisture at multiple depths. Trials have been taking place with growers from a variety of fruit and vegetable crops for the past 18-months.

In April, The Yield raised A$6.5m in a Series A funding round led by Bosch, with a total investment of A$11.5m to develop Sensing+.

This article was originally published in the spring edition of Produce Plus, out now.