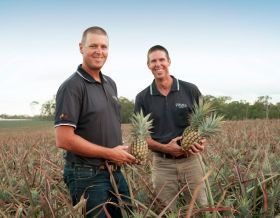 Australia’s love affair with tropical fruits will be the Royal Flying Doctor Service’s gain this month.

Piñata Farms will donate A$0.10 to the RFDS for every Piñata pineapple sold at 244 Woolworths stores in Queensland and northern New South Wales between 11-31 October.

As part of the promotion, customers will also be able to buy a A$2 wall token from participating stores and petrol stations, with proceeds going towards helping the RFDS deliver their services.

Piñata Farms' managing director, Gavin Scurr, hoped the campaign would raise more than A$13,000 for the RFDS’ Queensland division.

“The RFDS provides 24-hour emergency health care for remote and regional Australians and any one of us could need it at any time,” Scurr said. “On average, the RFDS assists one person every two minutes.

“Buying a pineapple during the campaign period in October is a simple way to show support.”

Piñata Farms is an avid supporter of the RFDS, having raised more than A$60,000 through Gavin and brother Stephen Scurr's participation in the annual Outback Car Trek during the past four years. This campaign is the first Piñata Farms has held in conjunction with a retailer.

Selected stores will also feature displays by the RFDS during the promotional period.

Piñata Farms is Australia's largest pineapple producer, sending some 800,000 trays of the fruit to market each year.