Fruit & Vegetables in Schools initiative is having a positive impact, "vastly improving" student health and education 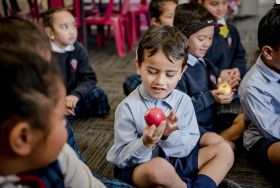 New research into the impact of Fruit & Vegetables in Schools (FIS) has found it is the widest-reaching health initiative for low decile schools in New Zealand, vastly improving health and education outcomes for students.

FIS encourages students to eat more fresh fruit and vegetables by supplying one piece of produce each school day to over 118,000 students, and is run in decile one and two schools throughout the country.

Research conducted last term by Quigley and Watts, which included surveying and interviewing principals and parents, highlighted the significant health benefits the food and nutrition initiative provides students, as well as opening up other learning opportunities.

Principal Bruce Young at Holy Cross School in Papatoetoe, Auckland, says improvements in overall health and attitudes have been the biggest factors.

“The change in children’s general health has been huge, along with their attitudes to trying new things and experimenting. It’s also had an impact on healthier lunch boxes and we’ve become a water only school," he explained. “The supportive social resources provided by 5+ A Day as part of Fruit in Schools are used two ways – because nutrition is integrated into everyday life, it provides a wider context for learning about the likes of science, for example, as well as improving health.”

Jerry Prendergast, president at United Fresh – the organisation that manages the initiative – says FIS addresses many social barriers to learning and aligns with the government’s priorities of achieving equity and child well-being.

“In many of these schools, children don’t have access to enough food, let alone fresh fruit and vegetables. Fruit in Schools helps address that barrier by feeding kids healthy food in a way that creates equality, regardless of background, and takes away the stress from whānau and teachers when children come to school hungry.”

Key research findings showed FIS improved both health and educational outcomes. Some 83 per cent of principals said the overall health of their children would decline if FIS ended, with 74 per cent and 62 per cent respectively saying concentration and academic outcomes would suffer.

Feeding hungry children remained the number one benefit of FIS, with eight out of ten principals reporting their school or kura had fewer hungry students and nine out of ten reporting a sense of equality between students, regardless of their family circumstances.

FIS has also been a powerful catalyst for other health initiatives and learning opportunities, with 74 per cent of principals saying FIS has encouraged actions such as establishing school vegetable gardens and planting fruit trees, cooking lessons, initiatives to encourage healthier lunchboxes, water-only policies, and increased physical activity during break and class time.

According to the research, FIS was also making a positive impact at home, with three-quarters of parents surveyed saying their child ate more fruit at home, and nearly half ate more vegetables. Seven out of ten parents also said FIS supported them to provide healthy food at home.

Based on the research, factors for success included schools taking ownership by developing their own distribution systems, appointing student fruit and vegetable monitors, building compost and worm farms for scraps, local supply and distribution of produce, and the inclusion of whānau and the community.

Funded by the Ministry of Health and managed by United Fresh New Zealand, with support from the 5+ A Day Charitable Trust, FIS was originally rolled out in 2005 and now runs in 548 low decile primary and intermediate schools – supplying over 118,000 students and teachers with predominantly locally-grown, seasonal produce every day.