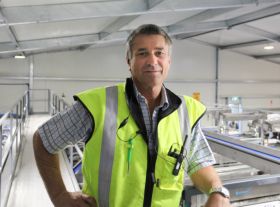 The move coincides with a steep rise in New Zealand cherry exports, which have quadrupled over the past four years to reach 4,000 tonnes during the 2017/2018 season. The Central Otago region produces around 90 per cent of the country’s export crop.

A specialist horticultural investment company set up in 2016, Hortinvest has been the driving force behind the establishment of the Pure Pac operation in Cromwell, a consortium of seven New Zealand cherry growers marketing fruit under the Pure Gold and Gold Reserve brands.

For its two new developments, Hortinvest is offering long-term contracts (seven–ten years), with a minimum investment of NZ$750,000 spread over four years.

"It costs between NZ$150,000 and NZ$200,000 per hectare based on a 40–80ha block, so there are obvious economies of scale,” Kirk said. “Investors can expect production to start three years after planting, with yield peaking at 18-20 tonnes per hectare as the trees mature.

With peak industry body Summerfruit New Zealand predicting 40 per cent growth in the dollar value of New Zealand cherry exports over the next 20 years, Kirk said the opportunity represents the possibility of a strong return on investment.

The forecast is supported by the findings of the Coriolis Report – released by the New Zealand Government – which investigated emerging growth opportunities in the cherry industry. It found the Southern Hemisphere was responsible for only 5 per cent of global cherry production, yet generated 49 per cent of global value.

“As a Southern Hemisphere cherry producer, the New Zealand industry is not competing with produce from the Northern Hemisphere,” Kirk added. “Therefore, our harvest from December to February is uniquely positioned to supply Asia (driven by the Chinese New Year appetite), Europe, the US and the Middle East.

"Chile is the biggest competitor at our time of year, producing fruit from November to January. However, Chile focuses on sea freight with produce taking up to 45 days to arrive. Our produce is shipped by air and arrives fresh within days. Buyers know the difference and are willing to pay a premium."