Marketer of the Year: add your name to the honour roll

If you or someone you know has shown excellence in fresh fruit, vegetable or floral marketing over this past year then it’s time to earn due recognition 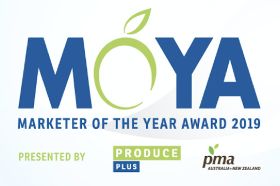 PMA Australia-New Zealand (PMA A-NZ) and Produce Plus Magazine are pleased to announce entries for the eighth annual Marketer of the Year Award (MOYA) are opening on 30 November 2018.

The award is open to any individual or team, with nominees sought from all parts of the value chain – whether it be a seed producer marketing its offering to growers, a packaging company marketing its solutions to distributors, or a retailer marketing its products to consumers.

The winner of next year’s award will be announced during the Hort Connections conference and trade show in Melbourne on 24-26 June 2019.

“Marketing plays a vital role in telling the story of where our food comes from and enhancing our fresh produce experience. This award recognises the best marketing campaigns from within our industry, and is an opportunity to celebrate the businesses and individual for their work,” said Darren Keating, CEO of PMA A-NZ.

“Marketers in Australia and New Zealand certainly aren’t afraid to think outside the box when it comes to marketing fresh produce and flowers,” said Jones. “We want to celebrate and reward that creativity with this award. We look forward to receiving another great set of nominations for MOYA 2019.”

T&G Global’s marketing team took out the 2018 award for its work on the Lotatoes Potatoes campaign, which centred around the launch of a new low-carb and low-calorie potato variety. Backed by a marketing plan focused on public relations activity, digital advertising and in-store point-of-sale materials, Lotatoes ranked in the top ten of all prepacked fresh potatoes in Countdown supermarkets across New Zealand within a month of launching, achieving 100 per cent distribution over the production window.

Previous MOYA winners include Compac’s Matt Stillwell for the Spectrim launch campaign (2017); Freshmax Group’s Matthew Crouch for the Sumo Citrus brand awareness campaign (2016); the Harris Farm Markets team for its ‘Imperfect Picks’ campaign (2015); OneHarvest for the launch of its Love Beets range (2014); Lisa Cork for her ‘Love Kumara’ rebranding project for Delta Produce (2013); and Sarah McRae at Freshmax New Zealand for her marketing of the Mahana Red Apple in New Zealand (2012).

Self-nominations and nominations by third parties are welcome and must be received by 24 April 2019.

Entry forms are available from https://www.pma.com/global-pma/anz/topics/marketing-exchange/moya

For more information on the PMA Australia-New Zealand & Produce Plus Marketer of the Year Award, please contact: