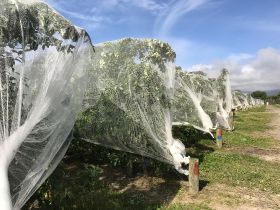 Subsidised hail netting has been suggested for South Australian growers

Fruit growers in South Australia’s Adelaide Hills are counting the costs of severe hail damage for the second year in succession.

Storm fronts ripped through the region late last month, with initial indications suggesting the damage is at least as severe as that caused by a similar weather event in October last year.

“Last October we talked of this being a ‘once in 100 year storm’, so it’s just heartbreaking to think that this can happen two years running,” said Susie Green, CEO of the Apple & Pear Growers’ Association of SA (APGASA).

Pear growers in Paracombe, Inglewood and Coromandel Valley appear to have escaped with only light markings, although this is yet to be quantified. Cherries and strawberries reportedly also suffered damage.

The full impact of the storm is likely to become clearer in coming weeks as fruit matures.

Apple & Pear Australia’s head of government relations, Jeremy Griffith, hoped the industry would again partner with major retailers to ensure high-quality fruit does not become unsaleable due to cosmetic issues.

Griffith also suggested the South Australian government should consider a subsidy scheme for protective netting, similar to one already in place in New South Wales.

“Growers will need concrete support from state and federal government to implement netting, our only real risk mitigation against another catastrophic storm – as well as offering protection from fruit bats, sun damage and helping to conserve water,” he said. “The NSW model, whereby netting was subsidised by 50 per cent, should be considered.”