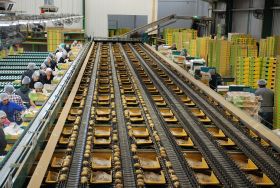 One of New Zealand’s leading post-harvest operators is giving back to the community it operates in.

Since its inception, kiwifruit and avocado growers who pack with DMS have voluntarily contributed one or two cents per tray of fruit to the trust. The money raised by the growers has been matched by DMS.

“In recent years the kiwifruit industry has not only recovered from the effects of Psa but has had remarkable earnings growth,” explained Craig Greenlees, joint managing director of DMS Progrowers.

“It is absolutely appropriate to enjoy that prosperity given the turbulence in recent years. However, it is also appropriate to acknowledge that at this time when we are doing so well financially, that is not true for all of New Zealand and many members of our communities require help.”

Under an initial round of grants made through the trust, Waipuna Hospice will receive NZ$70,000 to help fund night nurse salaries, while the Waipuna Hospice Foundation will get a further NZ$50,000 towards the long-term development of services.

Andre Hickson, chair of the DMS Progrowers Charitable Trust, said the five trustees agreed to focus on two core groups when considering which charities to donate to – general care for all ages and demographics, along with children and families in need.

The charities were chosen based on advice from the Acorn Foundation. Charities in Katikati and Te Puke were given special attention as that’s where most DMS growers reside.

“This first year is a small step and my challenge is for all DMS growers to lead the way,” Hickson says. “This is an investment in all aspects by growers in the future but instead of R&D and Psa, it is this time about community and social outcomes.”