A five percent increase in the value of vegetable production in the 2017-18 financial year was driven by potatoes, tomatoes and mushrooms 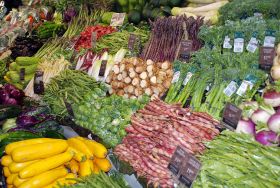 The gross value of vegetable production in Australia increased by five per cent in the 2017–18 financial year reaching A$4.1bn (US$2.8bn).

According to an Australian Bureau of Agricultural and Resource Economics and Sciences (ABARES) report funded by Hort Innovation, potatoes, tomatoes and mushrooms propelled much of the growth.

Vegetable production was the sixth-highest value agricultural industry in Australia, accounting for around seven per cent of the gross value of agricultural production.

The average rate of return (excluding capital appreciation) of Australian vegetable-growing farms is estimated to have remained steady at 3.9 per cent in 2018–19.

“The cost of labour still makes up a considerable proportion of total costs for all vegetables,” said Briggs.

“Many farms occasionally record negative farm business profit due to income fluctuation; this is primarily due to the farm not recovering the cost of unpaid family labour or setting aside funds to replace depreciating farm assets.

“This negative profit affects the long-term viability of the farm in that it has a reduced capacity to invest in newer and more efficient technologies.”

Briggs said many vegetable farm businesses were geographically dispersed with small farms experiencing the bulk of constraint in terms of water provisions during drought and the impact of natural disasters.

“Interestingly, small vegetable-growing farms, which have been defined as farms with less than 5ha of vegetable plantings, still accounted for 12 per cent of the overall gross value of vegetable production,” Briggs said.

“And in 2017–18, vegetable-growing farms that received more than 50 per cent of their total vegetable receipts by selling directly to retailers (such as Coles or Woolworths) were mostly small farms. These small farms accounted for 22 per cent of the gross value of vegetable production in that market.

“We are seeing a great deal of resilience from the entire industry, but in particular, the smaller farms who are working with substantially less capital and fewer resources while still making a huge contribution to our national bottom line.”