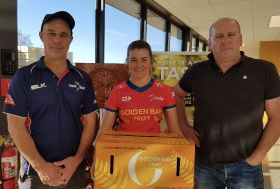 The company’s founding partners, Heath Wilkins of Birdhurst Orchards and Evan Heywood of Heywood Orchards, are both keen rugby enthusiasts who have children playing the game.

“Our philosophy to growing and marketing fruit is based on quality, sustainability and partnering, and we will bring those same values to helping Tasman Rugby grow female participation" said Wilkins, chief executive of Golden Bay Fruit.

Golden Bay Fruit grows, packs and exports a large selection of premium apples and pears from its largely automated packhouse in Motueka. It also grows kiwifruit.

“Horticulture is a major economic driver in Te Tau Ihu and for Golden Bay Fruit to recognise the value of female rugby to connect with their stakeholders is particularly pleasing,” explained Lewis. “We welcome their involvement in our game and our Union.”