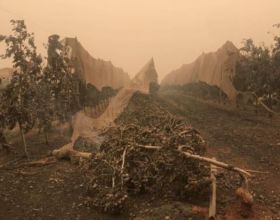 Australian apple and pear growers affected by summer bushfires have received more support in the form of A$31m (US$21m) in grants from the federal government.

The funding will be split up into grants of A$120,000 (US$82,900) per hectare for bushfire affected orchards in NSW and South Austalia.

Phil Turnbul, chief executive of Apple & Pear Australia (APAL), said the funding announcement was especially welcome given the significant and ongoing impact of Covid-19 on the Australian community and the economy.

"The announcement provides much needed practical assistance to fund the clean-up of destroyed orchards and to replace trees, trellises and netting,” said Turnbull. “The funding will also kickstart employment and provide a boost to the local economies."

“Our apple producers have suffered significant impacts with Apal estimating that 170.5ha of apple orchards needing to be replaced,” Littleproud said.

“To put this into perspective, each hectare can cost around A$360,000 to replace and take up to five years to produce income again.”

Australian Prime Minister Scott Morrison said he had talked with growers from Batlow and Tumbarumba in NSW who were uncertain of the future of their orchards following the fires and the government wanted to ensure their businesses could continue.

“They were having to make decisions about whether they are going to stay and have another crack and go forward again or they were going to give up,” Morrison said.

Produce Plus is now available to read on your phone or tablet via our new app. Download it today via the App Store or Google Play.