Ausveg adds Mitchael Curtis to its board

Northern Territory-based mango, melon and vegetable grower from the replaces Michael Quach on the board 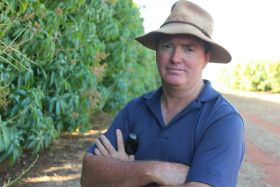 Ausveg, has announced the appointment of Mitchael Curtis, mango, melon and vegetable grower from the Northern Territory as a grower director on its Board.

Curtis will replace vegetable grower Michael Quach, based outside of Darwin, who is stepping down after serving over three years on the board.

Curtis owns and runs Katherine-based family business King’s Farms, which is one of the Northern Territory’s biggest horticulture businesses, producing more than 5m mangoes every year.

King’s Farms began in 1989 and has diversified into other melon and vegetable crops, including watermelon, pumpkin and eggplant, as well as an expansive apiary for pollination and honey production.

Bill Bulmer chair of Ausveg, welcomed Curtis onto the Ausveg board and said the Northern Territory vegetable industry was lucky to have a strong and passionate local advocate with a wealth of on-farm experience that will greatly benefit the national industry.

“The Northern Territory is becoming an increasingly important sector in the national agriculture industry, with its horticulture growers contributing a great deal to this growth,” said Bulmer.

“Growers in the Northern Territory are facing significant issues in sourcing labour, which has been exacerbated by the Covid-19 pandemic. But despite the challenges growers in this part of the country face, the industry is resilient and will continue to produce high-quality fruits and vegetables for local and international markets.”

Bulmer said Curtis has proven to be a highly effective business owner and has a strong track record of industry advocacy for growers in the Katherine region.

“King’s Farms is a successful business with a long history of producing high-quality fruits and vegetables,” Bulmer said

“Mitchael will be a perfect addition to the Ausveg board. On behalf of the board and the Ausveg team, I congratulate Mitchael on his appointment and look forward to working closely with him to advocate for the Northern Territory vegetable and horticulture sectors.”

Bulmer also thanked Michael Quach for his contribution to the industry during his time on the Ausveg board.