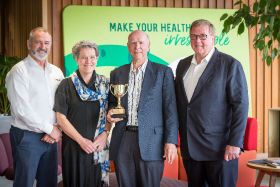 The country’s first commercialised red kiwifruit cultivar was first planted at the Kerikeri Research Centre in 2007, it was commercialised in December 2019 following many years of research, including exploring the fruit’s tolerance to Psa.

Bruce Cameron, awards judge and chairman of Zespri, said Low epitomised innovation within the industry, not just with his work on developing the red cultivar, but throughout his distinguished career.

“Russell’s success in developing this red cultivar has again enabled the New Zealand kiwifruit industry to provide the market with a new, distinctive great-tasting fruit which will strengthen kiwifruit’s share of the global fruit bowl in the years ahead,” said Cameron.

“The red cultivar will help extend seasonal employment opportunities given its early season harvest, and also enable the better use of industry facilities and infrastructure.

Lowe said he was pleased and honoured to be recognised and was grateful for the support from his colleagues at Plant & Food Research and Zespri.

“This breeding success has been very much a team effort by breeders, our operations team, research orchard network teams and subsequent evaluation systems,” said Lowe.

“Developing a commercial quality red kiwifruit has been quite a mission, as much of our breeding material was lost during the Psa epidemic. However, by using the remaining Psa-tolerant parent vines we have been able to develop advanced material leading to the release of Zespri Red.

“The joint research partnership between Plant & Food Research and Zespri has been the key to the support of the breeding programme and the subsequent success in releasing world-class varieties for the New Zealand kiwifruit industry. I feel we can expect to see more innovative varieties released in future from our strong breeding and research teams.”