Changes to Farmers for Climate Action board 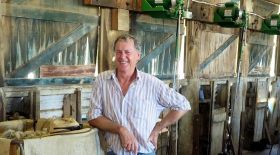 Charlie Prell joins as board chair for Farmers for Climate Action

Farmers for Climate Action (FCA), a movement representing 5,000 farmers and tens of thousands of supporters who want to ensure that rural Australia is part of the solution to climate change, has made two new appointments to its board.

Fourth-generation Crookwell sheep farmer and a passionate campaigner for the wellbeing of regional communities, Charlie Prell (pictured), has been elected to chair of the board.

Meanwhile, Anika Molesworth, an agricultural scientist and former young farmer of the year, has been elected to the position of deputy chair.

Prell said he planned to continue the work done by FCA under the inspiring leadership of outgoing chair Lucinda Corrigan.

“In the five years since it was established, Farmers for Climate Action has become an influential voice to government, politicians, and agri-political and regional leaders,” said Prell.

“It is the go-to organisation for farmers who want to see meaningful action to address climate change and a support mechanism for regional Australians who have the courage to speak up.

“Taking action on climate change will create great opportunities for farmers, who can benefit from hosting renewables and from being paid to sequester carbon in the trees and the soil on their farms,” he added.

Molesworth believes it is a critical moment for Australian agriculture. “To ensure a vibrant and productive agricultural sector long into the future, we must step up to the challenge of climate change,” she said. “The exciting thing is, farmers are a key part of climate solutions.”