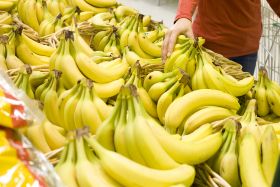 China’s fresh fruit and vegetable imports reduced in volume, but grew in value in 2020, according to Chinese customs data analysed by Fresh Intelligence Consulting’s Wayne Prowse.

China imported some 5.33m tonnes of fresh fruit in the 12 months to December 2020. This was led primarily by bananas, which accounted for 32 per cent of all fruit imported.

The total volume was down 8.9 per cent compared to the 12 months to December 2019, with the reduction largely attributed to the impact of the Covid-19 pandemic.

Despite this drop in volume, the value of imported fruit grew 7 per cent over the same time period, reaching US$1.73 per kilogram.

“The main reason for the difference in growth in volume and value is that durians increased in unit value from US$2.65 to US$4,” explained Prowse.

“This moved the overall value up 44 per cent, even though the volume decreased 5 per cent.”

In terms of products, China imported a total 1.74m tonnes of bananas in 2020. Second in line was dragon fruit, of which 618,317 tonnes were imported, while 575,529 tonnes of durian entered the country.

Mangoes and mangosteens (378,716 tonnes) and longans (346,751 tonnes) round out the top five categories of fruit imports.

Cherries continue to ride a strong wave of popularity. Total import volumes in 2020 grew 8.7 per cent to 210,376 tonnes.

This figure is anticipated to continue growing strongly over years to come, and while the category ranked 8th in fruit imported, it was the second highest valued product for the year. Chile shapes as the dominant supplier in coming seasons.

In the realm of fresh vegetables, a total 71,609 tonnes were imported, down 22.6 per cent compared to the same period 12 months prior.

The Philippines’ exports to China dropped 21.6 per cent in volume in 2020. This reduction can largely be attributed to a drop in banana exports, as previously reported.

Unsurprisingly, this had a flow on effect for nearby Cambodia, which shot up the ranking of supply countries to China. Fresh fruit exports to China grew 1,276.7 per cent in volume in 2020.

This massive growth came from a low base and was driven by its readiness to fill the gap in supply left by the Philippines, China’s largest banana supplier. This is a trend that looks set to continue into 2021 and beyond.

One country that will be unsatisfied by its export programme to China in 2020 will be Australia. Although yet to demonstrably impact Australia's fresh fruit exports, diplomatic relations between the two countries have been tense.

The reduction in exports is more likely to do with the impact of Covid-19, however, it is a result the Australian industry will be keeping a close eye on.