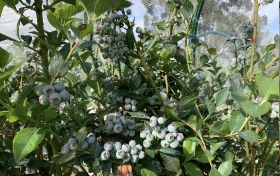 It has run trials with the premium blueberries over the last two years, involving selected growers in five Australian states.

“We know Australian’s love blueberries, with more than 17,000 tonnes sold each year,” said T&G’s global variety commercialisation manager, Danny Nightingale.  “With these unique premium varieties, we’ll be able to grow blueberries all year-round, compared to them currently being available for only approximately eight months.

“We’re incredibly pleased with the results of our trials, with the blueberries being bigger in size and tasting superior to what’s currently available.”

With 30ha already in the ground, and another 30ha soon to be planted, T&G expects volumes to steadily increase over the coming years.

The blueberries will be sold under T&G’s Orchard Rd brand.

“This is a game changer for the local berry sector because now we can grow in Australia, for Australian consumers, year-round, without the need to import from other countries,” Nightingale said.

“They’re easier to pick and the yield is significantly higher than other berry varieties, which is great news for growers because they’ll get more berries per hectare,” Nightingale explained.