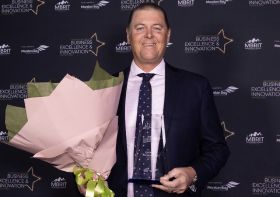 The family owned and operated farming business was among five finalists for the new category award.

Headquartered at Wamuran, near Caboolture, Piñata Farms grows four fresh produce lines over more than 1,000ha across Australia, employing more than 70 people and a seasonal workforce of up to 500 each year. It is Australia’s largest pineapple grower.

Gavin Scurr, managing director of Piñata Farms, said the business – established as a single pineapple farm by his grandfather in the 1960s – was proudly part of the Moreton Bay business community.

Scurr said the introduction of the Food and Agribusiness Excellence Award would put farming on the region's map.

"There are some 480,000 residents in our fast-growing region but many would be unaware of the significance of farming in the area," he said.

"As a family we've seen the growth and development of the region and are proud to play a part in it. It's a privilege to grow premium fruit so close to a major centre."

Upon accepting the award, Scurr paid tribute to Piñata Farms' employees, who deliver Piñata pineapples, strawberries, Honey Gold mangoes and raspberries to market throughout the year.

"Our people are committed to excellence throughout the supply chain,” Scurr explained. “In the past 24 months during the global pandemic, our greatest achievement has been to retain all full-time employees, keep staff safe and well, maintain morale and continue producing food. This is testament to the resilience and attitude of our entire team."