Another record year for SH exports to Asia 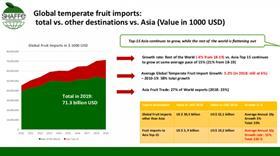 Exports of temperate fruit from the Southern Hemisphere hit a new Asian and global record in 2019, The Southern Hemisphere Association of Fresh Fruit Exporters (SHAFFE) said shipments ended the year on 2.6m tonnes worth more than US$7.6bn, an increase of 13 per cent and 15 per cent respectively compared to 2018.

The figures were released following the SHAFFE Asia meeting, which is held to analyse long-term market developments and trends for fresh fruit from the Southern Hemisphere into the leading Asian destinations.

The meeting usually takes place at Asia Fruit Logistica but this year was held virtually in early July due to the coronavirus pandemic.

Chilean shipments grew 20 per cent, continuing the country’s double-digit five-year average growth. Exports from New Zealand and Australia were up 16 per cent and 20 per cent respectively.

Together, China and Hong Kong imported 1.8m tonnes worth US$5.2bn, making them the main driving force behind the tremendous growth curve of Southern Hemisphere fruit in Asia. Other destinations in the region such as Japan, Taiwan and South Korea showed a stable development.

The Top-15 Asian countries for temperate fruit currently comprise of about 10.3m tonnes of overall imported goods to the value of US$19.6bn, of which round about 43 per cent comes from Intra-Asian trade and 40 per cent from Southern Hemisphere exporters.

After a difficult start to 2020 on account of Covid-19, SHAFFE said there were signs for “modest optimism” in the second half of the year.

“While the market experienced a drop of between 15 and 30 per cent for some products due to the acute emergency status in the months of March and April in Asian export destinations as well as at SHAFFE origins, it is now showing signs of recovery,” the association said.

But it noted that some key elements remain challenging, including the continued limited availability of airfreight, port congestions as well as other logistic impediments.

“Also, many market access negotiations for exports to Asian destinations have been on hold, given the strong focus on Covid-19 crisis management throughout the first part of the year,” it said.

On the positive side, SHAFFE welcomed “many trade facilitating measures and dynamic crisis management for incoming trade throughout the entire Asian region”.

The SHAFFE secretariat said it would continue to monitor the developments in Q3 and Q4, as a full picture will only be available by the end of 2020.