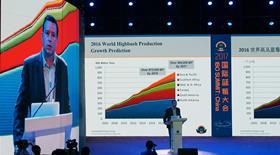 Members of the International Blueberry Organisation gathered in Qujing, the second largest city in China’s Yunnan Province and an up-and-coming blueberry production hub, for the group’s 2017 meeting on 10-12 September.

The event marked the first time the IBO Summit had been hosted in China, a nation of growing importance on the world’s blueberry production map, according to the Global Blueberry Statistics and Intelligence Report produced by the organisation.

“Planting distribution globally continues to shift,” said Cort Brazelton, founder of the International Blueberry Organisation (IBO) and co-author of the group’s biennial industry report, “In 2010, North America had over 75 per cent of the world’s plantings. Today, we see the first year North America contains less than 50 per cent, which reflects the internationalisation of the industry, as Europe and Asia’s portion is increasing.”

In 2016, the world produced 655,000 tonnes of blueberries, of which 425,000 tonnes were fresh. Europe has been growing consistently over the years, adding 20,000 tonnes every two years. Meanwhile, the Asia-Pacific region, led by China, has become a significant global producer.

“Between 2008 and 2016, world blueberry planting more than doubled. The world in December 2016 contained roughly 135,000ha of highbush blueberries,” said Brazelton.

While China is still a relatively small producer, the country’s planted area has grown tremendously in 2016, only second to the US, he said.

Looking ahead, Brazelton believes global production will reach 1m tonnes in a few years' time. “Blueberries are becoming a global commodity,' he noted. 'They remain much smaller than other produce commodities, but the economic expectations are usually much higher.'

He cautioned that the current rapid growth may bring opportunities as well as challenges.

IBO Summit 2017 was hosted by IBO, Qujing City Government and Yunnan Agriculture Department, and organised by Joy Wing Mau. The three-day event attracted some 300 delegates from over 15 countries.