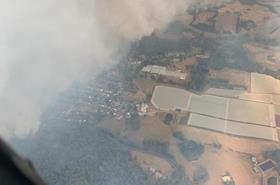 'South Australia (SA) has reported that approximately 25ha were damaged, with some growers more heavily impacted than others. Bilpin in the Blue Mountains in NSW has reported extensive fires but in several cases the fires were kept out of the main orchards with damage occurring on the perimeters of the orchards,' Turnbull added.

'It is too early to determine the extent of the damage in Batlow, as some growers are only beginning to gain access to their properties.'

“The orchard has over 200,000 apple trees but sustained damage to less than 5,000 trees on the boundary of the property becausefires were largely contained to areas outside of orchard blocks,” Montague said.

“While there is severe damage to some orchards and buildings in the greater Batlow area we are grateful that many of the buildings and houses in Batlow townanddistrict have largely been saved.”

In Western Australia (WA) fires in near Norseman, cut off theEyre Highway, the only sealed road between SA and WA.

“Things that we are bringing across from the east … things like cherries, stonefruit, watermelon, pumpkin, they'll run into short supply,' Dumesny told the ABC.

'On the other side of the coin, our seafood, avocado and lettuce producers are having problems because we can't get their produce to market on the east coast.'