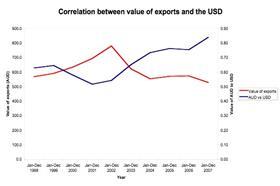 The value of the Australian dollar took a dive as the global economic malaise hit the country, but the currency’s swansong is the boost in exporters’ competitiveness.

“The outlook for exports is certainly enhanced significantly,” Steve Allen of Riversun, which coordinates Australian citrus exports tothe US market,told Fruitnet. “Looking at anything over US$0.90 was making a lot of export markets marginal for us.”